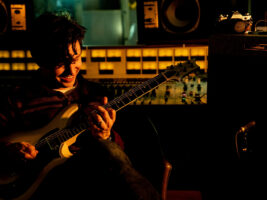 Bursting onto the scene with his power trio Back Door Slam back in 2003, Knowles has since gone on to become a revered session player and guitarist in his own right, sharing the stage with the likes of Peter Frampton, Joe Bonamassa and plenty more besides. In 2010, he became the first musician in history to play live directly to the International Space Station from Mission Control in Houston.

Now with his fourth solo album under his belt, Knowles sat down to tell us why his beloved Vela is his go-to six-string. “I think these things are so underrated,” he says. Indeed, the Vela is not the most popular instrument in the brand’s catalogue, but Knowles argues that this is his most inspiring guitar, and it encourages him to compose.
Knowles has worked with PRS for a number of years and cites his relationship with the brand as key to his love of the instrument. “Guitars are great but what matters to me is people,” he enthuses. “They’re a lovely company full of wonderful people. That’s what I’m looking for.”
In terms of spec, Knowles Vela has changed very little. The bridge pickup has been upgraded to a PRS 58/15 humbucker, replacing the previously installed Starla for more grunt. Other changes are purely cosmetic and include updated, off-white tuner buttons, witch hat control knobs for a more vintage look and numerous unicorn stickers on the back, there to help Knowles’ daughter overcome her previous fear of stickers. “When I’m away from home there’s a little bit of home on the back of the guitar, something silly which is lovely.”
This is Davy Knowles’ My Guitar Story.
The post My Guitar Story: Davy Knowles’ PRS Vela appeared first on Guitar.com | All Things Guitar.