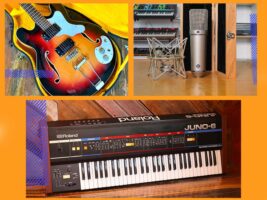 Black Friday at Reverb.com has begun, with participating brands such as JHS Pedals, Chase Bliss Audio and EarthQuaker Devices slashing prices on its products.

READ MORE: The best Christmas and Holiday Gifts for Guitarists in 2021

Deals will be available from 22 to 28 November and fresh listings will be added to the site on a daily basis.
Reverb says users can expect to find deals which take up to 70 per cent off products – both pre-owned and new – ranging from guitars and pedals to interfaces, microphones and much more, from makers such as Epiphone, Roland, Shure, Universal Audio and more.
On Reverb’s website, products have also been categorised into different sections for easier browsing. Here’s a look at the electric guitars on sale this Holiday Season.
In a separate blog post, the website also listed some of its favourite highlights from the sale period. They include a brand-new Fender Custom Shop Ltd 1963 Jaguar Journeyman in Ice Blue Metallic finish for $4,377 (usually $5,150).
Image: Reverb
Also listed was a “one-of-a-kind” early ’60s Gibson SG which has been “modified, switched around, cut, broken, fixed, played, loved and is ready to move on” – available for 15 per cent off ($8,495.75 instead of $9,995)
Image: Reverb
Head over to Reverb.com and check out the deals for yourself.
The post Reverb’s Black Friday sales have begun with limited-time deals from JHS, Chase Bliss and more appeared first on Guitar.com | All Things Guitar.