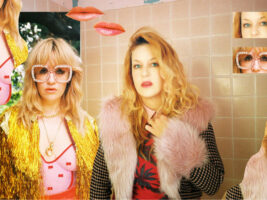 When Deap Vally’s Lindsey Troy and Julie Edwards first met, it wasn’t at a band audition or a gig or backstage at a show, oh no – they met at a crochet class in Los Angeles’ ultra-hip Silver Lake neighbourhood. The notion of these two hard-rocking women finding each other via wool craft might not be your traditional rock ‘n’ roll origin story, but it’s all part of the weird and wonderful yarn of Deap Vally.

READ MORE: The Collection: Simon White on his love of Les Pauls and vintage instruments

Whatever became of their knitting, their decade-long partnership as rockstars has been a fruitful marriage of minds and talents. It is this theme that they address on their third album, Marriage. When Troy explains the album title from her Los Angeles home, there’s no question it’s a perfect fit.
“I really wanted something iconic and cool-sounding and it just came to me,” she says. “For us, it just really works because we’d always joked about how being in a band was like being in a marriage, especially a two-piece band. At one point, we went to couples therapy – quite a while ago, maybe five years ago – because our relationship was pretty strained. We just kinda needed to have a professional mediator to work through some of the issues we were having. The music, instead of sex, [was] the thing; the release you guys share, the primal thing… the sex in the band marriage.”
The album arrives only a hot minute after this year’s EPs Digital Dream and American Cockroach. Some of the collaborators on the EPs appear on the new album, including outspoken electro rebel Peaches, singer-songwriter KT Tunstall, Eagles of Death Metal’s Jennie Vee, and Jenny Lee Lindberg of dream-pop band Warpaint.

Troy and Edwards are not new to collaborations, having released a collaborative album with The Flaming Lips called Deap Lips in 2020. Not since 2016’s Femejism has there been a full-length Deap Vally release, though. The album is another form of marriage, combining their collaborative projects with their own, signature sound. It involved negotiation, adaptation and learning a new way to apply guitar parts, Troy confesses.
“It was so different when we were doing the collaboration songs. Learning how to play guitar with a bassline, it was just very different than the way that I had previously written guitar parts. For example, with the Jenny Lee song, Look Away, she wrote this really cool, catchy bassline that Julie and I instantly loved. That really rooted the song, in a way that was similar [to how in] previous Deap Vally music, my guitar part would have done.”
Rather than taking the full responsibility for providing the melodic foundation for the collaborative songs, Troy took a step sideways and embraced a new role.
“I tend to write these guitar riffs that really root the song. She did that with her bassline, so what I ended up doing on guitar was accenting that, peppering in flavourful bits here and there with little slide parts… sprinkles on what that part she had written. That song didn’t call for a heavy guitar part, it fit better to have a whimsical, ethereal guitar part. It was fun for me to try on a different guitar personality, that was fun and exciting for me.”
Deap Vally. Image: Ericka Clevenger / Kelsey Hart
Mustang Sally
Troy is a creature of habit elsewhere though, and she has not veered from her beloved 1970s Fender Mustang.
“I have a mid-70s Fender Mustang that used to be my dad’s and that guitar is really great, I really love it,” she says. “It’s short scale, it’s small, it’s easy to play. It definitely had some strange modifications done to it before he owned it, so it gives it more of a warm sound, a little less twangy than Mustangs usually sound. I really love that guitar, it’s so easy for me to play.”
A few years ago, Troy bought another guitar that’s definitely not the norm, but has ended up being far more than the ‘in case of emergencies’ instrument she originally intended.
“When I was pregnant, I got a 1970s Ovation Viper and that’s the one I’ve been using as my backup,” she explains. “I’d say about two thirds of my set I play in a tuned down E♭, so I use my Mustang for that, then the rest of the set I use the Ovation.”
Apart from the performance guitars, she has a Baby Taylor acoustic that she’s had since childhood, and a 1970s Fender Mustang Bass. Common to each is their small size. Troy laughs when she recalls picking up “normal-sized” guitars and finding them unwieldly. The only time she hasn’t used her own guitars is on the acoustic Femejism Unplugged EP, when she borrowed her boyfriend’s 1950s Gibson.

Writing block
From the moment the album kicks off though, the flavour is full-bodied, electric rock ’n’ roll. The first single is a noodly, psychedelic rock number, fuzzy with layers of guitar and trippy vocals. It speaks to how far the band has come in a decade, and how they have evolved their writing process over the years.
“We like to spice it up so we do it every which way as far as writing goes,” Troy explains. “At the beginning, the first record was very much written either in our rehearsal space or at home where one of us would come up with an idea and bring it to the other, then we’d flesh it out together…The second record, we started working with Nick Zinner as a producer. He challenged us to write on the spot, in the studio, which is something we’d never done before. Some of it was written like that, or in our rehearsal space with him there taping it. It was nerve-wracking but super inspiring and fruitful.”
One of the album’s standout tracks is Billions a lascivious ode to “millions, billions, trillions…don’t you know it’s never enough?” that takes firm aim and the mega rich and the ‘aspirational’ nature of their existences, asking if it’s really something worth celebrating
“That song was definitely channelling the Elon Musks and Jeff Bezos’s and Bill Gates of the world,” she explains. “I think that the billionaires of the world are the modern-day kings… it’s fascinating for common people to imagine what it’s like to live like that. In a way, it kind of represents the dream for a lot of people – like, if I work really hard, maybe one day I’ll be able to get a little slice of that luxury that those billionaires get to experience.”
Lindsey Troy of Deap Vally. Image: Rob Ball / Getty Images
Marriage is a collective party of banging immersive rock ’n’ roll that isn’t afraid to colour outside the lines. As Troy sings on the opening track, “Ain’t no model citizen… perfuction, perfuction, perfuction! I’m a mess but I’m clever, so fuck it, whatever.”
It’s a neat summary of the ethos of Deap Vally – perfection is not the goal, but perfuction is.
“I don’t strive for perfection and maybe that’s why I play rock ’n’ roll, because it’s kinda charming in its sloppiness and that suits who I am,” muses Troy. “Even on stage, when I perform I’m perfuct. Everything I do has an element of perfuction to it and I just embrace that. Perfection is not attainable for me!”
Marriage is out now.
The post “We’d always joked about how being in a band was like being in a marriage… at one point we went to couples therapy” Deap Vally on why their new album has a very appropriate title appeared first on Guitar.com | All Things Guitar.