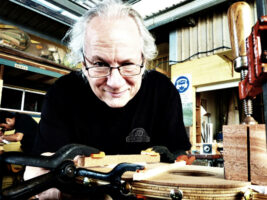 Rick Turner, the luthiering icon who helped shape the sound of rock in the 60s and 70s, has died at the age of 78.
Turner’s passing was made known by Jason Kostal of Kostal Guitars, who issued a statement on Instagram today (18 April). According to the post, Turner passed away the day before (17 April) due to “congestive heart failure and stroke.”
“Rick has been an icon within the lutherie community since the 1960’s and has been an incredible friend, mentor and sounding board to so many over the years,” Kostal wrote. “I truly believe he has forgotten more about guitar making [than] I will ever know, and he was always so willing to share his insight and advice.”
He continued: “He is most well known for his contribution to the world of electric guitars with Alembic in the 60s, creating the Grateful Dead’s Wall of Sound in the 70’s, and creating the Turner Model 1 guitar favoured by Lindsey Buckingham of Fleetwood Mac.”

Turner co-founded Alembic in 1969 and was instrumental in the design and build of the brand’s instruments.
In 1988 he served as President of Gibson Labs’ West Coast Research and Development division.
Later in 1992, after leaving Gibson, Turner focused his attention on piezo pickups for acoustic instruments, working with the likes of Jackson Browne and David Crosby on his designs. Eventually, he co-founded Highlander Musical Audio to manufacture piezo pickups.
The post Rick Turner, luthiery icon who helped shape the sound of 70s rock, dies at 78 appeared first on Guitar.com | All Things Guitar.