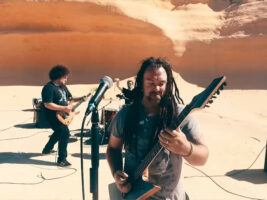 Dorje, the band founded by Chapman Guitars’ Rob Chapman, has officially called it quits after several years of unofficial hiatus.

The band consisted of Chapman, guitarist Rabea Massaad, bassist Dave Hollingworth and drummer Ben Minal. They gained a substantial online following, mainly due to Chapman’s presence as a YouTube vlogger and as a presenter for the Andertons YouTube channel. Their music videos were posted to Rob Chapman’s own channel, alongside Chapman’s gear demo videos and vlogs.
The band released two EPs: Catalyst in 2015, and Centred And One in 2016. Following the release of Centred And One, the band went on an unofficial hiatus as the members focused on other projects.
In 2020, the band revealed in a statement that drummer Ben Minal had quit. Dorje has now officially disbanded, with Chapman writing in a statement: “I am very sad to say that Dorje is no more. I would like to take this opportunity to thank all of the incredible people who supported us on our musical journey over the years.”
“I would also like to thank Ben, Bea and Dave – it’s been an absolute honour to play alongside such incredible musicians and make such amazing friendships. From now on all of our energy will be directed into our individual projects.

These projects include The Totemist, a band formed by guitarist Rabea Massad, and Clockwork Wolf And Co., a band formed by Chapman.
The post Rob Chapman’s band Dorje has broken up after five years of inactivity appeared first on Guitar.com | All Things Guitar.