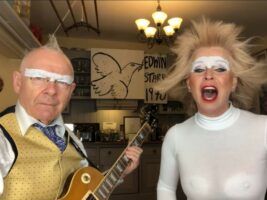 Robert Fripp and Toyah Willcox are back for another episode of Sunday Lunch, and this time they’re keeping things topical with Edwin Starr’s protest anthem War.

The couple continue in their protest against Russia’s invasion of Ukraine with a stirring rendition of Starr’s 1970 anti-war classic, singing to the lines “War, huh / What is it good for? / Absolutely nothing” as a painting of a white dove with an olive branch in its beak hung in the background.
Fripp was cladded in the colours of the Ukrainian flag – a yellow vest and blue tie – while Willcox smashes a toy tank at the end of the video for good measure. The duo also made sure to drive the point home by painting a strip of white across their faces.
Inspired by the song lyrics, the video description reads “War – What is good for…..”. Check out the cover below:

Fripp and Willcox have expressed their support for Ukraine in several episodes of Sunday Lunch this month, starting with a cover of Living Colour’s Cult Of Personality, followed by a cover of Neil Young’s Rockin’ In The Free World, and most recently, Kaiser Chiefs’ I Predict A Riot.
In other King Crimson news, the progressive rock group are the subjects of a brand new rock documentary which premiered at this year’s SXSW film festival. Titled In The Court Of The Crimson King after the band’s 1969 debut album, the documentary features in-depth interviews with co-founder Fripp as well as former members of the band.
The post Robert Fripp and Toyah say no to war in rousing Edwin Starr cover appeared first on Guitar.com | All Things Guitar.