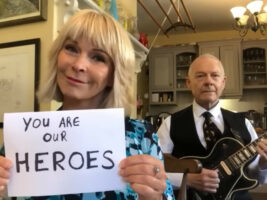 In place of a new episode of Sunday Lunch, Toyah Willcox and King Crimson’s Robert Fripp have shared a cover of David Bowie’s Heroes to honour the late Queen Elizabeth II.

The cover — first posted in 2020 to commemorate VE day — sees Willcox holding up handwritten placards dedicated to the Queen and more, while Fripp plays the guitar behind her.
Unsurprisingly, it’s a tune the latter knows pretty well since he was the one in charge of the guitar work on Bowie’s original.
“Toyah Willcox and Robert Fripp wish to extend condolences to the Royal Family, and respect the dedication HRH Elizabeth II showed her country during her unprecedented reign,” the video’s description reads.
“The Sunday Lunch series is paused to play “Heroes” in acknowledgement of the passing of Her Majesty the Queen.”
Tributes from around the world of music have poured in following the passing of Britain’s longest-reigning monarch last Friday (8 September).
Paul McCartney wrote, “God bless Queen Elizabeth II. May she rest in peace. Long live The King,” while Rolling Stones frontman Mick Jagger shared, “For my whole life Her Majesty, Queen Elizabeth II has always been there.
“In my childhood I can recall watching her wedding highlights on TV. I remember her as a beautiful young lady, to the much beloved grandmother of the nation. My deepest sympathies are with the Royal family.”
Watch the cover of Heroes below.

Beginning in 2020 at the height of the coronavirus pandemic, Fripp and Toyah’s Sunday Lunch series has heard them take on dozens of rock hits, including Foo Fighter’s All My Life, Neil Young’s Rockin’ in the Free World, Billy Idol’s White Wedding, Crazy Train by Ozzy Osbourne, and Pantera’s 5 Minutes Alone.
For those who can’t get enough of the musical duo, a Sunday Lunch tour is in the works, with venue and ticketing details to be revealed soon.
The post Robert Fripp and Toyah Willcox cover David Bowie’s Heroes in honour of Queen Elizabeth II appeared first on Guitar.com | All Things Guitar.