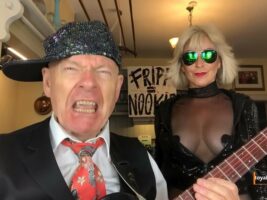 King Crimson mastermind Robert Fripp and his wife and singer Toyah Willcox are back in the kitchen for this week’s Sunday Lunch cover of Limp Bizkit’s Nookie.

READ MORE: “I don’t really use that many pedals”: Harry Styles gets gifted a one-off pedal that uses transistors from the Ed Sullivan Show studio

The pair wrote in the video’s description: “The Duo are back on form this week – we have literally no words for this one, Oh and we have left the Fripp mistake in because its so funny!!”
In this episode, we have a sequined-hatted-Fripp on guitar duties while Willcox rocks on to the banging lyrics of the 1999 nu metal banger. You also get to hear the guitarist exclaiming “Bollocks!” as he hits the wrong notes at the start of the video.
And in typical Sunday Lunch fashion, their kitchen cabinet carries a cheeky message that says “Fripp = Nookie”.
Watch the full cover below:

Beginning in 2020 at the height of the pandemic lockdowns, Fripp and Toyah’s Sunday Lunch series has heard them take on a number of rock classics, including Foo Fighter’s All My Life, Neil Young’s Rockin’ in the Free World, Billy Idol’s White Wedding, and Crazy Train by Ozzy Osbourne.
Earlier this month, the couple also delighted fans with a full cover of Grace Jones’ 1985 classic Slave To The Rhythm. The track features former Buggles member Simon Darlow, whom Willcox worked with on her latest album Push Pop.
In other news, Fripp and Willcox have recently announced that a Sunday Lunch tour is in the works, with venue and ticketing details to be revealed soon.
The post Robert Fripp and Toyah Willcox do it all for the ‘Nookie’ on this week’s Sunday Lunch appeared first on Guitar.com | All Things Guitar.