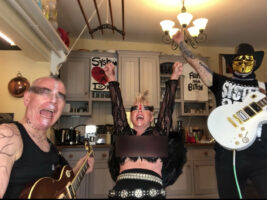 Robert Fripp and his wife, Toyah Willcox, have shared a cover of Chop Suey by System Of A Down in the latest episode of their Sunday Lunch video series.

The couple, joined by guitarist Sidney Jake and sporting possibly their wildest outfits yet, shared the cover on YouTube yesterday (4 July), with the caption: “The kitchen trio are back and this really is a belter. Don’t miss this one.”

Last week (27 June), the trio shared their take on Aerosmith’s Love In An Elevator and as a bonus, Toyah shared the video of her latest single Levitate, taken from her upcoming album Posh Pop. The album is expected to arrive on 27 August.
Speaking to NME about the forthcoming album, Toyah said “Posh Pop was a magical experience created out of the need and ability to make contact with our fans in a heartfelt way.”
“The terrifying distance between those who run the world and those on the ground inspired my writing,” she said. “Working with Fripp in the studio, we just handed him the chord charts the day before and said: ‘We want you to come in and improvise and that’s what we’ll use’. It was spontaneous.”
Meanwhile, Robert Fripp is set to hit the road with King Crimson later this July on a North American trek supported by The Zappa Band on several dates. The tour will kick off in Florida on 22 July and end in Washington, DC on 11 September.
The post Robert Fripp and Toyah Willcox share their cover of Chop Suey by System Of A Down appeared first on Guitar.com | All Things Guitar.