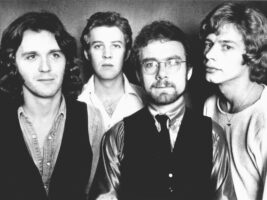 Robert Fripp, who is seldom seen participating in public interviews, has opened up about his time in King Crimson and described why he believes conflict arose so frequently between the members.

READ MORE: Robert Fripp And Toyah Willcox Do It All For The ‘Nookie’ On This Week’s Sunday Lunch

In Guitarist, Fripp recalled the three main principles the band were expected to follow and implied that whenever ‘personal difficulties’ arose, it was due to members putting themselves ahead of their bandmates.
“My personal difficulties with any Crimson musician have been if they favour themselves or see themselves as somehow coming ahead of the other players,” he explains. “The music comes first: principle one. Principle two: the band comes first. Three: we share the money. Why do there seem to be personal difficulties? Look at those three principles and really that’s the clue to anything that follows.”
Alongside describing how he would often clash with members when it came to distributing the profits made, the guitarist also confesses that he resented being given the title of ‘bandleader’ in King Crimson – saying that any decisions he made were to enhance the playing of the other members.
“There was never a conflict of interests with Robert [Fripp, himself]. If I said, ‘Look, lads. I think we should do this.’ It was because I thought we should do this. Why? Primarily for the music.”
“I’ve never viewed myself as a bandleader. What I would aim to do is construct situations or conditions within which the talent of each of these players is given an opportunity to develop,” he says. “One of Bill [Bruford]’s good quotes from the time was, ‘It was as if Robert expected us to know what to play.’ Of course. If I have to tell you what to play, why are we working together?”
Fripp continues, explaining that the members would have to diffuse this hostility by going on tour, knowing that the fans’ reactions to the music would encourage them to keep the band together.
“With Crimson it […] has always been complex, always problematic and always very demanding. If you would like a band to break up, have writing rehearsals. What you do when you hit that problem is you get on the road. Then you introduce an audience into the situation, music comes to life and you’ll keep going.”
The post Robert Fripp says King Crimson’s dynamic has “always been complex, always problematic and always very demanding” appeared first on Guitar.com | All Things Guitar.