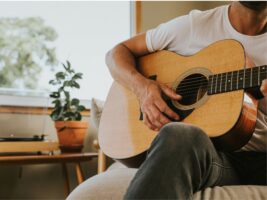 18-29 year-olds are more likely to play the guitar than any other demographic, study shows

Earlier this week, the results from a series of surveys were published, with statistics showing that of all the demographics across the United States, people aged between 18 and 29 are most likely to play the guitar.

READ MORE: Pedal Builder Fulltone Appears To Be Shutting Down Its California Premises After 30 Years

Have you ever wondered why you struggle so much to learn an instrument? Or why you didn’t spend more time pursuing the skill? Well, according to a recent study by YouGov, the answer may be because of your generation.
Published on Tuesday (August 23), the study involved 3000 adult US citizens and aimed to discover which demographics were most likely to learn to play an instrument and have an optimistic outlook towards the skill.
Image: YouGov
Breaking down the results into a series of graphs, the study showed that, while two-thirds of Americans have attempted to play an instrument at some point in their lives, 18-29-year-olds were the most likely to have attempted this skill, with 71% saying that they felt encouraged to pursue the idea.
It was also revealed that significantly more people in this age range opted to play the guitar than seen with other demographics. Here, adults over 65 were not only shown to be less likely to play an instrument in general, but also less inclined to pursue the guitar — most likely taking piano lessons instead.
In addition to showing that the younger generation is more likely to pick up the guitar than other age ranges in the US, the study also suggests why this may be the case at hand.
Looking at the results, it appears that older generations may be less inclined to play an instrument due to the feeling that the skill does not ‘come naturally’ to them. Of the 3000 people who took part, the correlation showed that those who began learning an instrument at a younger age had a more positive outlook on the skill, while those who began learning at an older age felt more difficulty and later abandoned the endeavour.
Image: YouGov
What’s more, those who attempted to learn the instrument through sheet music were the most likely to quit after a short time, while those encouraged to play via freestyling or learning by ear generally stuck with the skill longer.
So next time you consider reclaiming that guitar from the back of the attic, remember to leave the sheet music behind.
The post 18-29 year-olds are more likely to play the guitar than any other demographic, study shows appeared first on Guitar.com | All Things Guitar.