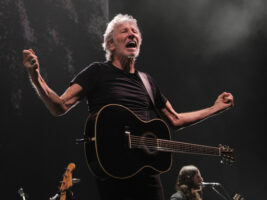 Pink Floyd co-founder Roger Waters is reportedly jeopardising the band’s catalogue sale with his recent comments on the Russian invasion of Ukraine.

READ MORE: Guns N’ Roses release live video for You Could Be Mine from 1991 show at the Ritz Theatre

A new report by Variety claims that the band have quietly been shopping their catalogue and other assets for a reported sum of $500 million, but Rogers’ recent comments have given at least one potential buyer second thoughts, with others on the fence about changing their position.
“The other bandmembers must be furious,” a source told the outlet, as the deal which includes the rights to Pink Floyd’s name, likeness and album artworks will likely see some devaluation.
Waters recently claimed that he is “on a kill list that is supported by the Ukrainian government” among other things in a recent interview where he also stated that the United States is “the most evil of all by a factor of at least 10 times,” adding, “We kill more people. We interfere in more people’s elections. We, the American empire, is doing all this shit.”
Waters had a similarly controversial stance on the Russian invasion of the Ukraine, claiming, “You’ve seen [those reports] on what I’ve just described to you as Western propaganda. It’s exactly the obverse of saying Russian propaganda; Russians interfered with our election; Russians did that. It’s all lies, lies, lies, lies.”
He previously wrote an open letter to Ukranian First Lady Olena Zelenska, criticising the West for supplying weapons to Ukraine and requesting that Zelenska to persuade her husband to “stop the slaughter”.
Waters later penned a second letter to Vladimir Putin after receiving a reply from Zelenska asking him to direct requests for peace to the Russian Federation. “When Mrs. Zelenska replied to me via Twitter, I was very surprised and mightily moved,” he wrote in his letter to the Russian premier. “If you were to reply to me, I would mightily respect you for it, and take it as an honourable move in the right direction towards a sustainable peace.”
The post Roger Waters’ Russia comments are reportedly affecting Pink Floyd’s catalogue sale appeared first on Guitar.com | All Things Guitar.