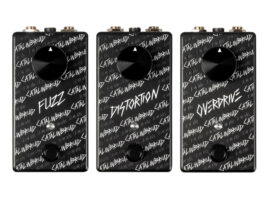 Catalinbread has launched a series of simple, one-knob stompboxes as part of its brand new Elements Series.

READ MORE: Joe Bonamassa’s Signature Epiphany is based on the ES-335 heard on his first solo album

The new range consists of three new pedals for fuzz, distortion and overdrive, all hosting just one volume knob. Each is fairly cost friendly coming in at £136.41 and is ideal for those just starting out, or looking to streamline their set up.
In a press release, Catalinbread said, “Don’t be fooled by the simplicity; each circuit was designed and internally set to the sweet spot so you only have to worry about the volume level, just bring your amp and guitar.”
Each Elements pedal is said to be able to work with a variety of amps of all costs and wattages, and the brand notes, “Whether you’ve been playing for three months or 30 years, the Elements was designed for those that care about tone and don’t care to read an entire manual to get the show on the road.”
The overdrive and the distortion offer soft and hard clipping sounds respectively. The fuzz, meanwhile, should sort you out for nasty, high-gain sounds thanks to its silicon transistor design.
All three pedals feature top-mounted jacks, and the volume controls give a handy click sound so users can really get a feel for the level they’re dialling in for.
You can have a listen to how they sound in action in the demo below:

Just last month (September), Catalinbread launched the Soft Focus pedal, which it described as a “shoegazer’s dream”. The pedal was inspired by the Yamaha FX500, used by artists of the popular late 80s and early 90s genre such as Slowdive.
You can find more information and order yours now at catalinbread.com
The post Catalinbread unveils Elements Series of simple stompboxes for fuzz, distortion and overdrive appeared first on Guitar.com | All Things Guitar.