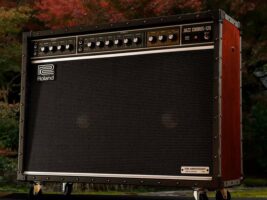 Roland has announced a 50th anniversary edition of the JC-120 Jazz Chorus amp, one of its most famous and long standing products.

The JC-120 Jazz Chorus has been a staple for the brand for over five decades, and Roland is using this opportunity to celebrate with a limited edition version of the product. The amp is faithful to the original design with two 12-inch speakers, an immersive onboard stereo chorus, and the standard model’s control layout.
However, to celebrate the anniversary, each amp dons a deep cherry wood veneer with a burgundy open-pore finish, inspired by Japan’s famous cherry blossoms.
As well as this, each amp will have dark grey grille cloth and be stamped with a special badge that features a hand-engraved serial number.
Roland has coined this as a “special collector’s version of the classic JC-120 Jazz Chorus amplifier”.
The amp was originally released in 1975, just three years after Roland established themselves as a guitar and music manufacturer. It soon became one of the most notable amps available, with iconic users including Johnny Marr from The Smiths, and Matt Bellamy from Muse.
Due to it’s success, pedal manufacture Boss even spun it into it’s own standalone effect pedal, known as the CE-1 Chorus Ensemble.
If you want to get your hands on the special edition of the JC-120 Jazz Chorus Amp, you need to act fast as there are only 350 units in this limited run. They are available from select retailers now, and will be available in-store in Feburary for $1,999.
However, those looking to buy one can register their interest on the Roland website which you can visit on Roland.com.
The post Roland announce 50th anniversary limited edition JC-120 amp appeared first on Guitar.com | All Things Guitar.