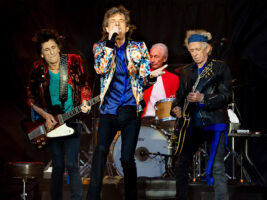 The Rolling Stones will be pressing on with their upcoming US tour this fall, following the death of drummer Charlie Watts, who passed away at 80 earlier this week.

“The Rolling Stones’ tour dates are moving ahead as planned,” tour promoter Concerts West wrote in a statement [per NME].
The 13-date No Filter tour was originally planned for 2020, but was postponed to this year due to the COVID-19 pandemic. It now kicks off on 26 September in St. Louis, Missouri and closes on 20 November in Austin, Texas.
Before his death, Watts had pulled out from the trek to recover from a medical procedure. Drummer Steve Jordan was announced to take his place on the throne. “It is an absolute honour and a privilege to be Charlie’s understudy and I am looking forward to rehearsing with Mick, Keith and Ronnie,” Jordan said in a statement at the time.
Rolling Stones No Filter USA 2021 Tour
September
26 – St Louis, The Dome at America’s Center
30 – Charlotte, Bank Of America Stadium
October
4 – Pittsburgh, Heinz Field
9 – Nashville, Nissan Stadium
13 – New Orleans, New Orleans Jazz and Heritage Festival
17 – Los Angeles, SoFi Stadium
24 – Minneapolis, U.S. Bank Stadium
29 – Tampa, Raymond James Stadium
November
2 – Dallas, Cotton Bowl Stadium
6 – Las Vegas, Allegiant Stadium
11 – Atlanta, Mercedes-Benz Stadium
15 – Detroit, Ford Field
20 – Austin, Circuit Of The Americas
The post Rolling Stones to press on with US tour after Charlie Watts’ passing appeared first on Guitar.com | All Things Guitar.