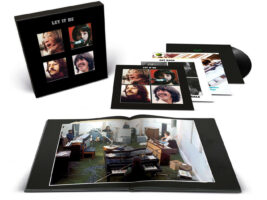 The Beatles have announced a new special re-release edition of their final studio album Let It Be, which comes out on 15 October.

READ MORE: Peter Jackson says his Beatles docuseries will be “far more intimate” than fans are used to

The new edition features new stereo, 5.1 surround DTS and Dolby Atmos mixes from producer Giles Martin, the son of Beatles producer George Martin, and engineer Sam Okell.
Ahead of its launch, three singles dropped today (27 August) as a sneak peek into the new edition: Let It Be (2021 Stereo Mix); Don’t Let Me Down (First Rooftop Performance), and For You Blue (1969 Glyn Johns Mix).

The release will arrive in multiple formats, including a Super Deluxe edition with 27 previously unreleased session recordings, a four-track Let It Be EP and a hardcover book, titled The Beatles: Get Back.
The book chronicles the making of Let It Be in the words of the Fab Four, complete with unseen photos, tape box images and more. It coincides with Peter Jackson’s forthcoming docuseries of the same name.
“I had always thought the original film Let It Be was pretty sad as it dealt with the break-up of our band, but the new film shows the camaraderie and love the four of us had between us,” McCartney wrote in the book’s foreword.
“It also shows the wonderful times we had together, and combined with the newly remastered Let It Be album, stands as a powerful reminder of this time. It’s how I want to remember The Beatles.”