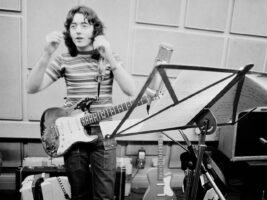 Gallagher came out at the very top of the list, ahead of artists such as U2, Thin Lizzy, Christy Moore and Van Morrison. The full list of nominees was chosen via a combination of submissions from Newstalk listeners and an expert panel.
Gallagher was born in 1948 in Ballyshannon, County Donegal, Ireland, and raised in Cork. His first band, Taste, was a blues rock power trio. After they disbanded, Gallagher embarked on his solo career, during which he released numerous solo studio records and collaborations with musicians such as Muddy Waters and Jerry Lee Lewis.
Gallagher died of liver failure at the age of 47 in 1995. There are numerous tributes to him dotted around Ireland, including a statue in his county of birth and a bronze model of his Fender Stratocaster in Dublin, under the sign for a street named in his honour.
Newstalk revealed the full top ten from the poll, which is as follows: