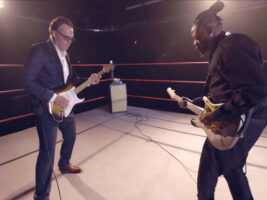 Eric Gales has released the video for his new track I Want My Crown, featuring the “world heavyweight guitar battle” that he teased last week, with Gales taking on Joe Bonamassa. The single’s release also heralds the coming of Gales’ new studio LP Crown.

READ MORE: Blues Titans Eric Gales and Joe Bonamassa to duke it out in a World Heavyweight Guitar Battle

Last week, Gales posted a teaser for the upcoming guitar battle, which turned out to be part of the music video for the new track.
I Want My Crown is taken from the LP Crown, which Gales teased the existence of all the way back in 2019. Produced by Bonamassa and Josh Smith, the album features 16 tracks and comes as Gales celebrates five years of sobriety.
You can take a look at the new video for I Want My Crown below.