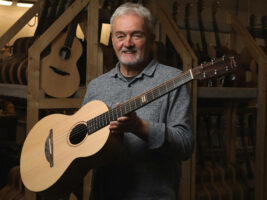 In celebration of the release of Ed Sheeran’s new album =, Lowden Guitars has once again teamed up with the singer-songwriter for a Sheeran By Lowden acoustic.

The new = guitar is limited to 3,000 pieces worldwide. It bears the Sheeran By Lowden W body size, with a body made from figured walnut back and sides and a sitka spruce top.
Signature appointments include a maple inlay of an equals symbol at the seventh fret, and a butterfly insignia on the truss rod cover and neck heel cap.
George Lowden said of the new instrument and their collaboration: “We have been honoured over the past years that Ed has chosen to play Lowden guitars both on-stage and in studio. We are delighted to have established a close ongoing relationship and are proud that Ed entrusted us to create the Sheeran by Lowden range of guitars which will be played by him and enjoyed by a number of his fans around the world.”
The limited-edition instrument does not have a price yet, however you can register your interest to be notified when it’s up for sale over at sheeranguitars.com.
= is Sheeran’s fourth studio record, and was released on 29 October of this year. It was preceded by lead singles Bad Habits, Overpass Graffiti and Shivers.
The post Sheeran By Lowden launches signature = guitar to celebrate new album appeared first on Guitar.com | All Things Guitar.