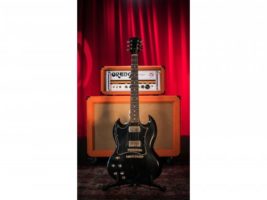 Mikey Demus of Skindred has joined forces with Reverb to sell some of the guitars and gear he’s accumulated over the years. If you’re a fan of the southpaw axeman, this is a great opportunity to own some of the equipment that have played a vital role in his career.
Here are a couple of items we think will go very quickly:
Ebony 2005 Gibson SG Special: Demus purchased this in 2005 to replace his main guitar, which was stolen on the road. It was used heavily on tour as well as on Shark Bites and Dog Fights, Union Black and a cover of AC/DC’s Back In Black that Skindred recorded.
Left-handed 1961 Fender Custom Shop Stratocaster: Demus reckons he’s used this masterbuilt guitar for nearly every clean or crunchy part in the studio over the past decade, and in every headline tour since the release of Union Black in 2011.
Apart from these, other items on sale include a Gibson Les Paul studio, an EVH Japanese Wolfgang, a 70s Squier Vintage Modified jazz bass, a 1990 Marshall JCM900 4100 amp head and much more.
Scroll through the gallery below to check out some of the guitars on sale: