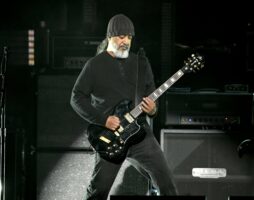 Soundgarden’s Kim Thayil addresses rumours of a potential reunion: “It’s very likely that Matt and Ben and I will play together”

Following the tragic passing of grunge pioneer and Soundgarden frontman Chris Cornell in 2017, the future of the band is a topic that has been pulled into question countless times in the past 5 years. Now, Kim Thayil has confessed that the remaining members are open to reforming and creating new music.
READ MORE: Screaming Trees and QOTSA Vocalist Mark Lanegan Dies at Age 57
In a recent interview with Lifeminute, the Soundgarden guitarist discussed what is installed for his music career, including what the future holds for the surviving band members.
Expressing that he still has a close bond with the band’s remaining members, Matt Cameron and Ben Shepherd, Thayil explained that he’s open to a revival of the grunge band: “I think it’s very likely that Matt and Ben and I will play together.” He continues, “if we’re going to play those songs again, […] it’ll be with at least the three of us, you know, that’s the closest we’re going to get at this point.”
This comes after the guitarist’s participation in the Grunge hometown’s take on “The Rock ‘n’ Roll Fantasy Camp”, entitled, “Sounds of Seattle”, in which he worked as a tutor alongside groups of young talent over a three-day span.
Image: Kevin Mazur/Getty
Not yet addressing any intentions to find a new vocalist for the band, Thayil did instead clarify how any new releases would sound in comparison to the band’s most famous tracks, namely Jesus Christ Pose and Spoonman.
“My songwriting is definitely going to be different. It really is within the context of who you’re playing with” he states. “I certainly could have instrumental parts and guitar parts that are very Soundgarden-y because our identity really came from the kind of guitar playing that we play in the early days, […but] without Chris singing, it’s going to be arranged differently and perhaps take on different colours and different sounds.”
Whilst the members have not yet begun working together officially on any new projects, the future of the band looks hopeful in comparison to the bleak outlook expressed a year after the frontman’s death. In a discussion with Seattle Times in 2018, the guitarist addressed the future of Soundgarden as “likely nothing”.
However, looking forward, it seems as though a revival of the band may come sooner than expected. “ I think we’d want to re-explore [working together again], do that, you know, sometime in the future, and I think the three of us have an interest in doing new things. We certainly like working together.”
Find the full interview with Kim Thayil with Lifeminute here.
The post Soundgarden’s Kim Thayil addresses rumours of a potential reunion: “It’s very likely that Matt and Ben and I will play together” appeared first on Guitar.com | All Things Guitar.