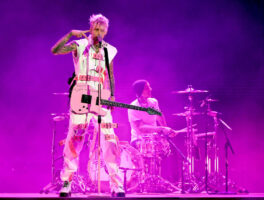 Machine Gun Kelly takes on a TikToker following accusations he doesn’t play live: “You should go watch the performance”

Once again, Machine Gun Kelly has become the centre of controversy after hitting back at a TikToker who accused him of not playing guitar live during his performances.

READ MORE: Rock was Revitalised in 2021 by Måneskin and TikTok, says New Report

In the original post on TikTok, user Gunnar DüGrey analysed images of the rapper in an attempt to prove that he engages the “kill switch” to effectively mute himself when performing live.
Entitled “Machine Gun Kelly EXPOSED”, the analysis was uploaded last week and showed the TikToker breaking down images of MGK playing live using his signature pink Schecter. DüGrey, who works as a Guitar Center employee demonstrated the use of the switch, showing how they function, when in the down position “cuts out all the volume and the music is completely silent”.
He continued to compare it to the settings used by the musician when on stage: “Exhibit B – he’s definitely playing here. Let’s zoom in… definitely still in the down position”.
Concluding the video, DüGrey summarised that whilst his accusations are not fully verified, it seems unfathomable that the musician uses the function for anything more than eradicating his own sound when performing: “I’m not making any definitive claims here, but it certainly seems like [Kelly] doesn’t use [the switch] for much other than muting his guitar while he plays.”

Speaking out against the video which went viral last week, MGK recently took to his own TikTok page and created a video that confronted the user’s claims and denied all accusations made in the original post.
“Hold on, one second” he states. “I only play my guitar live. You should go watch the performance – you can clearly hear it live.”
Kelly goes on to confront the TikToker further to retain credibility, claiming that DüGrey had “reversed engineered [the function] to look like that”; proceeding to tell him “buy the guitar and see for yourself.”

In a later response, DüGrey later took to the social media platform once more to issue an apology to the musician. Releasing a subsequent clip he stated: “I did not expect 2.5million people – and MGK himself – to see [the post] so I probably would have done a little bit more research, a little more due diligence had I known that was gonna happen.”
“I was wrong” he admits, later confessing that he was unaware that the switch could be reversed. “I’d like to formally apologise to Mr Kelly – maybe we could do a shred battle or a collab or something like that if you don’t totally hate me. I think that’d be a lot of fun but…”
As of now, the original video has hit over 4.5 million views, with MGK’s response also going viral and totalling over 10 million views. Closing his apology to the musician, DüGrey suggested he be considered as a potential “backup guitar player”, however, unsurprisingly, Kelly has yet to respond.
See the TikToker’s response to the confrontation here.
The post Machine Gun Kelly takes on a TikToker following accusations he doesn’t play live: “You should go watch the performance” appeared first on Guitar.com | All Things Guitar.