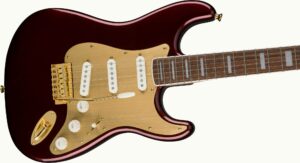 It’s easy to forget how important the Squier brand is in the history of guitar making. Before Fender revived the discontinued string-making marque back in 1982 to use on officially licensed Japanese-made guitars, the idea of an affordable Stratocaster or Telecaster simply did not exist. If you wanted a budget Fender in 1981, you had to make do with student models like the Lead and Bullet, or grab a quality knock-off from the likes of Tokai and Greco.

It was Squier that pulled Fender’s iconic instruments out of their ivory tower and paved the way for the world-dominating megacorp of 2022, which will sell you a Strat for every market – from the price of a decent pair of jeans all the way up to the price of a nearly-new hatchback.
The early days of Squier coincided with Fender’s post-CBS upheaval, and so it’s entirely fitting that this new 40th Anniversary Gold Edition Strat feels like just the kind of left-field mix that emerged from Fender’s Japan operation in the period where the streams of Squier and Fender were crossing.
Image: Fender
Under the hood, however, this guitar is functionally identical to the stock Classic Vibe ’60s Strat. That means we get a nyatoh (not to be confused with nato) body, maple neck and laurel board, plus Fender-designed alnico pickups. You also get a modern 9.5-inch fingerboard radius and a comfortable modern C profile, plus a vintage-style six-screw vibrato bridge. So far so standard, but that is rather burying the lede – just look at the thing.
Yes, this Strat positively screams ‘extra’: the big 70s-style headstock, the gold hardware, the bound fretboard with pearly block inlays, the anodised gold pickguard and, of course, that sumptuous Ruby Red Metallic finish. The way it mashes up some of the maddest excesses of the 70s to make something altogether cool is grin-inducingly reminiscent of Fender Japan’s most famous creations. It’s also a perfectly outre way of celebrating Squier’s birthday, but is it just a show pony?
Image: Fender
In use
Well, no, quite frankly. If it’s been a while since you’ve spent some time with a Squier, you may find yourself double-checking that it’s not Fender written on that oversized peghead. It chimes and quacks in all the ways a good Strat should, the tuners will stand up to a fairly intense period of whammy wanging without losing a step, and the neck, while a little generic, is comfortable. Despite the glossy finish there’s nothing sticky about it either, and the fret ends are nicely smoothed off all the way up that beautiful bound board.
The pickups, with their staggered-height polepieces, are nicely balanced; and whether you’re funking out of phase on position four or stamping on a Tube Screamer to belt out some rich driven chords in position one, they do the job with aplomb – something that’s aided by the always welcome decision to give the bridge pickup its own tone control.
Image: Fender
This writer remembers a time when Squier guitars were bland stepping stones to Fenders made in Mexico or the US, but this one is a testament to how far the brand has come – and how the lines between the top of Squier and the bottom of Fender are ever blurrier. This is a serious guitar straight out of the box, and what few quibbles we have (the neck pickup lacks a little character, and anodised gold hardware would have been the cherry on top) are hardly worth mentioning in a sub-£500 instrument.
What’s less clear-cut is if this Gold Edition is worth a hundred quid more than the Classic Vibe ’60s guitar it’s based on – but that’s in the eye of the beholder. If you want something more traditional, this guitar is clearly not for you… but if you want a Strat that stands out from the crowd while not breaking the bank, well, you and this Squier could be celebrating many anniversaries of your own together.
Key Features

The post Squier 40th Anniversary Stratocaster Gold Edition review: Is this the coolest Squier Strat ever? appeared first on Guitar.com | All Things Guitar.