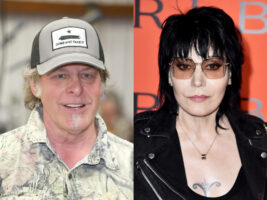 Ted Nugent responds to Joan Jett: “She viciously attacked me”

Ted Nugent has spoken out (again) about recent comments from Joan Jett, and is now claiming she “viciously attacked him” in a recent interview. The feud between the two rockers is now essentially in round three, so let’s unpack.

The discourse began earlier this year, when Nugent criticised Rolling Stone’s choice to list Jett at 87 on their list of the Top 100 Greatest Guitarists in a YouTube livestream. The list was published way back in 2003 and was reposted online in 2010, and Nugent had a lot to say, stating, “You have to have shit for brains and you have to be a soulless, soulless prick to put Joan Jett [in there].” Nugent, who did not make the list, also called her “a great rock and roller.”

In a recent interview with NME, Jett addressed Nugent’s comments where she said, ““Is that his implication? That he should be on the list instead of me? Well, that’s just typical – it’s what I’ve dealt with my whole life, being written off. Ted Nugent has to live with being Ted Nugent. He has to be in that body, so that’s punishment enough.”
She savagely added, “He’s not a tough guy. He plays tough guy, but this is the guy who shit his pants – literally – so he didn’t have to go in the Army.” Since, Jett’s comments, Nugent is fired up once again.
Responding via a YouTube video, Nugent stated, “I said there are a lot of killer guitar players, and Joan is a good guitar player. She makes great music, it’s not adventurous as I like, but she’s awesome. So she viciously attacked me personally, saying I was jealous because I was not on it. I never mentioned I should be on it.” He then added, “I’m not jealous that I’m not on.”

As Joan Jett has not made any comments in return to his latest remarks, could this be the day the great list debate is put to rest? We can only hope.
The post Ted Nugent responds to Joan Jett: “She viciously attacked me” appeared first on Guitar.com | All Things Guitar.