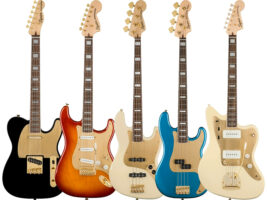 Squier is celebrating its Ruby anniversary with the launch of five Gold Edition electric guitar and bass models.

READ MORE: Squier’s Contemporary series gets a Jazzmaster, Starcaster and bass models for 2022

The special models celebrate some of the brand’s best-known instruments, so there’s sure to be something for every player. They include a Stratocaster, Telecaster, Jazzmaster, Precision Bass and Jazz Bass, each adorned with gold-plated hardware and a gold anodized aluminium pickguard.
Squier 40th Anniversary Telecaster, Gold Edition
The new Telecaster has a Nyatoh wood body with a glossy finish and a bound Indian laurel fingerboard with pearloid block inlays. On the backside, there’s an engraved anniversary neck plate.
Player-friendly refinements of this commemorative model include a slim and comfortable C-shaped neck profile for comfortable playing feel, vintage-style tuning machines and a three-saddle string-through-body bridge.
Available in Black and Sherwood Green Metallic.
Squier 40th Anniversary Stratocaster, Gold Edition
One of the first instruments to bear the Squier name back in 1982, this premium-looking Strat celebrates its heritage in style. It features a Nyatoh or poplar wood body, a C-shaped maple neck and Indian laurel fingerboard like the Tele, along with a six-saddle synchronised vibrato bridge for an authentic Strat feel. For electronics, there’s three Fender-designed single-coils with alnico 5 magnets to offer a range of classic tones.
Available in Lake Placid Blue, Ruby Red Metallic and Sienna Sunburst.
Squier 40th Anniversary Jazzmaster, Gold Edition
The Gold Edition of the Jazzmaster is furnished with a collection of upscale features for Squier fans. The poplar wood instrument has a C-shaped maple neck with an Indian laurel fingerboard topped with pearloid block inlays. The glossy new guitar also has vintage-style tuners and a six-saddle floating bridge plus non-locking tremolo along with Alnico single-coil pickups.
Available in Lake Placid Blue and Olympic White.

Pricing and availability
The Squier Gold Edition series is available online, with each model listing for $599.99 / £499 / €599.
Learn more at fender.com.
The post Squier celebrates its 40th anniversary with five Gold Edition guitars appeared first on Guitar.com | All Things Guitar.