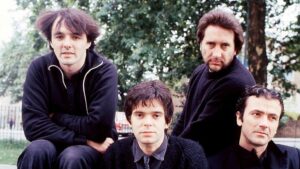 Music Instrument News is sad to report the death of original Stranglers drummer Jet Black, at the age of 84.

Unlike many of the new breed of youngsters who ushered in the fresh air of Punk, Brian Duffy (Black’s real name) was already in his late thirties when his band The Stranglers found fame.

Jet Black stood apart from almost everyone else in the punk/new wave revolution because instead of emerging from the dole queue into a band, he was already a successful businessman, owning a fleet of ice cream vans, an off-licence, and a company manufacturing home brewing kits at a time when the hobby was highly popular. It was an indication of Black’s commitment to The Stranglers that he abandoned all his businesses to throw himself completely into the task of making the band a success.

Having been a musician since the mid-seventies, Black eschewed the frantic amateurish thrashing of other punk drummers, playing a far more nuanced jazz-based style, although he could absolutely thrash the skins as well as anyone when the music required it.

Along with the rest of The Stranglers, Black was much more intelligent and sophisticated as an individual, and as a musician, to join and enjoy time with a ‘punk’ band. The Stranglers were far too clever and artistic to embrace the one-dimensional dismissals of humour and wit, that reduced so many punk acts to slavishly follow the blueprint of The Sex Pistols. The band’s albums including The Raven and The Gospel According To The Meninblack were concept albums exploring the notion of alien life forms which brought them considerable critical, of not commercial success.

The mid-80’s Black again departed from the standard drumming techniques of his contemporaries, by embracing an electronic kit for use in the recording studio, an unusual development at the time, even more so given the punk/new wave reputation of his band.

As a musician, Black was aware of the limitations of the standard acoustic kit, and he designed the now patented Jet Black Power Bass Drum Pedal which allows the pedal to be placed in any position, and still play the kick drum accurately.

In the mid-2000’s Jet Black stepped back from full-time drumming duties with The Stranglers, due to ongoing respitory problems. He would often play the second half of the set, with a stand-in player covering the first numbers.

By 2015, Black had virtually retired from live appearances with the band, and he officially retired from The Stranglers in 2018, and spent his last years designing and building wooden furniture.

Jet Black leaves a legacy if eclectic and innovative drumming on the Stranglers albums to which he contributed, and any student of the drumming art is advised to take a close listen to his style, and observe the ways in which a jazz-influenced technique can blend and enhance a rock (never a punk!) band.

Black is survived by two sons, and will be remembered for being, as his band mate bassist Jean-Jacques Burnel put it, “A rebel with many causes.”