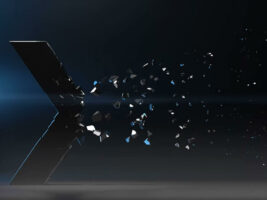 The teaser bears the title: “Coming July 15, 2021 – The finest tones ever finally break free.” This text is also the only information in the video itself, aside from a large X that reconstitutes itself, being shattered in reverse. This is, of course, not very descriptive of whatever product is on the way.
However, the context of the teaser can lend a little more meaning to the sparse info. IK Multimedia is the company behind AmpliTube, a software guitar processing plugin. In recent years, the popularity of hardware modelling has exploded, with units such as the HX Stomp and the Quad Cortex offering many a great digitally-created tone in a solid, tangible piece of gear, rather than needing a DAW.
So, is AmpliTube “breaking free” into a physical modeller? Many of the comments on the teaser seem to think so. “I’m going to put my dollar down on a physical amp, like others have mentioned,” reads one. Another notes the popularity of the format: “Oh, I got it. A series of physical amps with AmpliTube built-in. Something like Kempers, Fender’s Mustangs, Positive Grid’s Sparks, Yamaha’s THRs, Line 6’s Spider Jams, Marshal’s CODEs, Boss’ Katanas, etc.”
It’s also possible that the product isn’t a physical modeller at all. Some have noted that AmpliTube Brian May exists, and the line “break free” could be in reference to the Queen song I Want To Break Free. There’s also the hashtag “#iwanttobreakfree” in the video’s description.
IK Multimedia are exhibiting at Summer NAMM 2021, an in-person event that kicks off on 15 July. Stay tuned to Guitar.com for the latest from the show. See IK Multimedia’s trailer below.