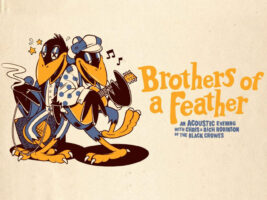 The Black Crowes have announced a new film entitled Brothers Of A Feather, celebrating their 2020 reunion and their March 2020 concert. Made in partnership with The Coda Collection, the film arrives on the service with a number of other historic Black Crowes concert films.

READ MORE: Rich Robinson on reuniting the Black Crowes: “You have to cut people slack”

Brothers Of A Feather captures Chris and Rich Robinson reuniting as a duo at a sold-out concert from San Francisco on 6 March 6, 2020. It’s available to stream on The Coda Collection beginning today (9 July) Take a look at its trailer below.

Alongside it, there’s a number of other concert films including Live At Landgraaf 1993, documenting the Black Crowes’ live set in the Netherlands just after the release of their second studio album The Southern Harmony And Musical Companion. The setlist includes tracks such as No Speak, No Slave, Thorn In My Pride, and Jealous Again.
There’s also 1996’s Amsterdam Sessions, filmed at a recording studio in Holland. The band showcase highlights from their third and fourth albums, such as Downtown Moneywaster, How Much For Your Wings, and Evil Eye.
Finally, Live at Landgraaf 1990 showcases the group’s European debut, following the release of their first album Shake Your Money Maker.
The Coda Collection is a subscription streaming service focused on music documentaries and concert films. At the moment, it’s only available to Amazon Prime members in the US, for an extra $4.99 a month. There is a seven-day free trial, and it’s set to roll out globally across 2021.
Earlier this year, The Coda Collection premiered What Drives Us, Dave Grohl’s documentary/love letter about bands touring in vans.
Find out more at codacollection.co.
The post The Black Crowes announce new concert film celebrating their reunion appeared first on Guitar.com | All Things Guitar.