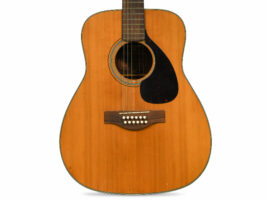 A Yamaha 12-string acoustic guitar owned by founding Pink Floyd member Roger ‘Syd’ Barrett is to go under the hammer at the Cheffins Art And Design Sale later this month. The guitar is being sold by Barrett’s nephew Mark Barrett. All proceeds from the sale will be split between the charities MIND and the Arthur Rank Hospice.

The guitar has a serial number of 1090448 and a date code for 21 October 1969. Little other information on the instrument has been made available, however it seems to be unmodified and in good condition.
Other items going up for sale include a garden table and chairs made by Barrett and a painting by Barrett, done just months before his death in 2006.
Image: Cheffins
Mark Barrett said of the sale: “At the time my grandmother sold the Hills Road house in late 1974, Roger was not living there and some of his belongings from the studio, including the guitar, a record collection, a turntable and some spotlights were transported to my parent’s house just round the corner in Hinton Avenue, for safekeeping. Roger never collected the guitar and my father Alan Barrett, Roger’s brother, continued to store it over three subsequent house moves, eventually offering it to me after Roger died.
“I finally collected it from my father’s house in November of 2020 shortly before he died. Unfortunately, I never got to know my uncle Roger, though I would have loved to, but he was a recluse in his later years. Having inherited the guitar from my father, I would like the two charities, MIND and the Arthur Rank Hospice to benefit from the sale proceeds in memory of both Roger and Alan.”
Martin Millard, Cheffins’ Director added: “Syd Barrett still has a cult-like status as one of the greatest icons in the world of music. Syd’s Pink Floyd years were turbulent, marred by drug addiction and struggles with his mental health, however when he retired to Cambridge, he became a recluse. His lack of public presence in his later years only went to add to the intrigue which still surrounds him.
“It therefore seems incredibly fitting that Mark Barrett has chosen to support both MIND and the Arthur Rank Hospice with the proceeds of the sale. As a Cambridge resident and one of our city’s most famous exports, we are privileged to be able to offer one of his guitars for sale and are sure that this, as well as the other Barrett lots are sure to be of keen interest to his global army of super-fans.”
Find out more at cheffins.co.uk. Find out more about MIND and Arthur Rank Hospice at mind.org.uk and arhc.org.uk respectively.
The post Syd Barrett’s Yamaha 12-string acoustic is going up for auction appeared first on Guitar.com | All Things Guitar.