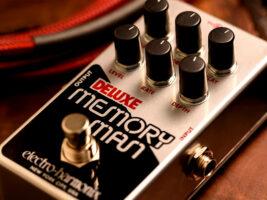 Electro-Harmonix’s Memory Man is one of the most revered analogue delay pedals of all time, and now the brand has unveiled a new version for 2021. The Nano Deluxe Memory Man has a number of features that make it far more practical than its vintage counterpart.

The original Deluxe Memory Man had controls for overall level, delay blend, feedback and delay time. These are still present here, and joined by rate and depth controls for the pedal’s modulation, rather than the original’s single control for chorus/vibrato intensity. Compared to the original, the pedal is also a lot more portable – housed in EHX’s Nano enclosure, it’s around a third of the width of a vintage Deluxe Memory Man.
The delay time has also been expanded out to 550 milliseconds, with a minimum of 30 milliseconds. Shorter delay times and fast modulation settings will allow the pedal to effectively work as a chorus pedal, however, longer times still allow for spacious ambience.
There’s also the original’s ‘overload’ LED at the top of the unit, telling you when your feedback signal is too much. This can be used to teeter on the edge of oscillation, which higher feedback settings will let you blast into for psychedelic freakout sequences.
There’s an internal switch if you want to change the pedal between trails bypass or true bypass, depending on your signal chain and sonic needs.
Hear it in action below.

The pedal has a list price of $203.10. Find out more at ehx.com.
The post Electro-Harmonix announces the Nano Deluxe Memory Man, shrinking the classic delay down and adding some modern features appeared first on Guitar.com | All Things Guitar.