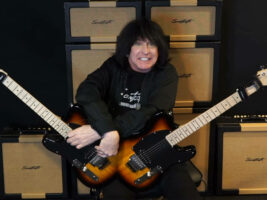 Sawtooth Guitars and Michael Angelo Batio team up for “the guitarist’s dream”, a limited-edition Double-Guitar

Michael Angelo Batio has joined with Sawtooth Guitars for a limited-edition run of a take on his famous Double-Guitar concept.

The 50-guitar run (arguably a 100-guitar run) features two T-style, sunburst-finished guitars, with one being left-handed and one being right-handed. The two halves are electronically separate, and can be split apart for easier transport.
Together. Image: Sawtooth Guitars
Aside from their handedness, both halves are identical in specifications. There’s a D-shaped bolt-on maple neck with a 21-fret maple fretboard, a sycamore body (chosen, unsurprisingly, for its lightness), and a double-locking Floyd Rose 1000-series bridge. The bridge was chosen specifically for its locking properties, as Batio explained that his Double-Guitars would go out of tune with non-locking bridges and nuts, due to his theatrics such as playing the guitar upside down.
Apart. Image: Sawtooth Guitars
Electronics consist of a single coil-splittable humbucker in each of the guitars’ bridge positions, and a set of volume and tone controls for each guitar.
The Double-Guitar lists for $1,499. It comes with a hardcase, a signed certificate of authenticity, Batio’s Speed Kills DVD, an autographed photo, two ChromaCast string dampeners, and a ChromaCast black woven guitar strap. Find out more at sawtoothworld.com.
Hear the guitar in action below.

The post Sawtooth Guitars and Michael Angelo Batio team up for “the guitarist’s dream”, a limited-edition Double-Guitar appeared first on Guitar.com | All Things Guitar.