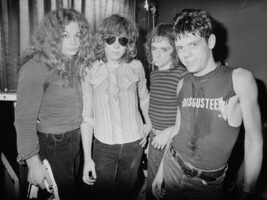 Teenage Head founding guitarist Gord Lewis was found dead in his home in an apparent homicide, with police detaining Lewis’ 41-year-old son for alleged second-degree murder.
Lewis was found by police in his Hamilton, Ontario apartment on 7 August after being alerted by a string of emails from two accounts belonging to a man named Jonathan Lewis to various reporters and media outlets complaining of an unspecified illness and claiming his father was dead, The Hamilton Spectator reported.
One email sent on 6 August sighted by the newspaper reads, “Now I just want to get help for my sickness and give my Dad a proper burial. He didn’t deserve this,” while another sent on 7 August read in part,  “Funeral people need to get here quick. My Dad is starting to decay.”
Det. Sgt. Sara Beck of the Hamilton police homicide unit told the outlet that the body showed “injuries consistent with foul play” that police believed likely happened two or three days before it was discovered. Police also announced the detainment of Lewis’ 41-year-old son for second-degree murder at the scene, but have not officially announced Lewis’ death as further testing on the body is required due to the state of decomposition.

Lewis’ brother Brian told the outlet that the family had no comment and asked for their privacy to be respected at this time.
Lewis founded punk band Teenage Head in 1975 alongside guitarist Steve Park, vocalist Frankie Venom, bassist Steve Mahon and drummer Nick Stipanitz. The group have released eight studio albums, having released their last album, Teenage Head With Marky Ramone, in 2008. Teenage Head also released a remix and remastered compilation titled Fun Comes Fast in 2017.
Lewis reportedly came up with the group’s name, having been inspired by The Flaming Groovies’ 1971 album Teenage Head.
The post Teenage Head founding guitarist Gord Lewis found dead, son charged with second-degree murder appeared first on Guitar.com | All Things Guitar.