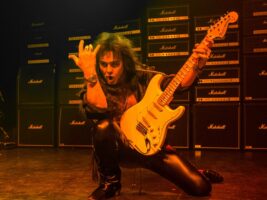 Yngwie Malmsteen has fired back at people who label his shredding as “emotionless”, calling them “tone deaf”.

In a new interview with Guitar World, the guitarist responded to the ‘speed vs emotion’ debate, saying, “I’m sure there are examples of empty fast notes. Those examples do exist. But if you listen to the way I play, and you hear a fast slur or a fast run, a fast arpeggio, or whatever I’m playing, if you slowed that down, it would have full harmonic value along with passion and expression.”
“And just listen to my vibrato – that’s all I have to say. Nothing more needs to be said. You can’t tell me that has no emotion. You must be tone deaf.”
Malmsteen also spoke about his approach to performances, adding that he has never allowed himself to have a bad show. “I’ve always had the ability to bounce back from almost anything. I have what they call ‘tennis memory,’ so if something starts going wrong, whether it’s my fault or not, I’ll just turn around and go, ‘Well, fuckin’ watch this!’ and will do something outrageous in order to make everything better.”
“It’s always in my hands, so if I allow myself to let it slip and go out of control, it’s my fault and I will go off stage feeling shitty,” he concluded.
Malmsteen recently made comments on his experience growing up in Sweden. Talking about the country’s overall disinterest in rock until around 1983 or 1984, Malmsteen said that a conformist attitude was to blame. He explained, “When I lived [in Sweden] in the late 70s, early 80s, if you had long hair it was like: ‘oh, get a job! That’s not a real job!’, you know? It was very bad.”
“When I came to America, the first thing I noticed was the attitude – or the lack thereof. People of any age, they go like ‘hey, are you in a band?’ or something like that. In Sweden, they would go, ‘hey! Get a job, you drug addict!’”
The post Yngwie Malmsteen says people who think his shredding is “emotionless” are “tone deaf” appeared first on Guitar.com | All Things Guitar.