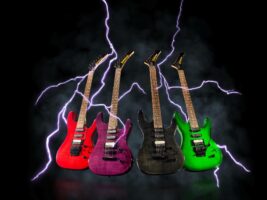 The Striker collection is available via Kramer’s website and at authorised dealers nationwide in the US. The Striker HSS retails at $349, the Striker Figured HSS Floyd Rose at $399 and the Striker Figured HSS Stoptail at $379.
Guitar.com previously featured Kramer’s Custom Graphics Series Baretta ‘Feral Cat’ & The 84 ‘The Illusionist’ on The Big Review, giving the 1980s-inspired guitars an 8/10 overall score for their “outrageous” sound. Reviewer Darran Charles called the guitars “two of the best-sounding and most immediate rock guitars we’ve played”, praising the grunt, power, definition and clarity offered in the tone of both guitars.
In other recent guitar news, Squier has released a selection of new Vintage Edition models as part of its wide-ranging 40th anniversary celebration. The collection includes a Tele, Strat and a Jazzmaster, as well as Precision and Jazz bass models, featuring aged chrome hardware, paired with satin urethane finishes to project subtle Road Worn vibes. The limited edition selection retails for a slightly higher price than what we normally get with Squier at an RRP of £499.
The post Kramer announces high-performance Striker electric guitar collection appeared first on Guitar.com | All Things Guitar.