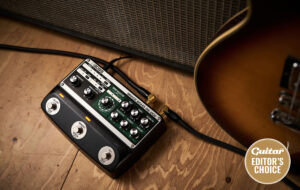 The Big Review: Boss RE-202 Space Echo – Bigger is better with this amped-up tape-delay unit

It was a dramatic plot twist worthy of any Netflix original. While an internet leak seemed to have robbed Boss of its surprise launch of the RE-2 Space Echo, little did the online hypesters know that the compact RE-2 was only one half of a two-pronged attack.
And we’re here to tell you that the other half, the RE-202 Space Echo, is one hell of a prong.

READ MORE: Fender PO-220E review: Is this the best budget acoustic Fender has ever made?

Of course the RE-2 gets the most attention because, as we explained in our review , it’s the first-ever truly board-friendly version of the 1974 Roland RE-201 Space Echo. But shrinking a gigantic tape-based machine into a compact enclosure inevitably leads to compromises – and the RE-202 is having none of that. Quite the opposite, in fact.

Sticking to a form factor closer to the old dual-footswitch RE-20 has allowed Boss to retain all its key features, while advances in digital technology have made it possible to add some interesting new ones.
Most significantly, the RE-202 lets you store four presets and – thanks to a slightly wider shape that allows room for three footswitches rather than the RE-20’s two – toggle through them without taking your hands off your guitar. Those four presets increase to 127, should you have the MIDI hardware to control them.

That’s big news in itself. What’s more is that a button now lets you flip between ‘new’ and ‘aged’ virtual tape, a saturation control lets you push the repeats into grimy overdrive, and a fourth virtual tape head ensures more complex multi-head patterns than you could ever achieve with a real RE-201.
While the RE-2 features a single tone knob, the RE-202 retains the separate treble and bass controls, which are handily centre-notched. But that’s the only other feature that really differs from the smaller pedal. You get the same controls for echo volume, repeat rate (time) and intensity (feedback), plus reverb level and, naturally, that new option for Wow & Flutter.

Beyond that, the main advantage of paying more for the bigger unit lies in those three footswitches. Each has a secondary function accessed by holding it down for a second, and all three are potentially useful.
First up, holding down the bypass footswitch engages Warp mode, which pushes the pedal into infinitely repeating self-oscillation. This entertaining trick is also available on the RE-2 but can only be accessed on that unit via a complex boot-up procedure. With this one it’s right there at your feet.

The middle switch is for skipping through the four memory slots (plus manual mode); holding this one down simply turns the reverb on and off.
Then there’s the tap-tempo footswitch on the right, which doubles as a Twist switch. Again, this manically upward-spiralling self-oscillation effect is available on the RE-2 but only as a boot-up option.
The RE-202 has its own extra options, engaged via a sequence of knob twists and button presses while the pedal powers up. As with the smaller pedal, these let you change the dry-through signal to a digital emulation of the RE-201’s preamp, mute the dry signal completely, double the delay time, and choose which controls will be affected by an expression pedal. But this time you can also swap between spring, hall, room, plate and ‘ambience’ reverb types.

In use
The RE-202 gets us on its side straight away by being such a solid, weighty bit of kit, and by nodding to the form factor of the first-ever Boss pedal, the CE-1 Chorus Ensemble of 1976.
Our first task is to establish a starting point that matches the core sound of the RE-2. That comes easily enough in any of the first seven modes with saturation minimised, tape age set to ‘new’, and all the other knobs pointing where we left them on the smaller unit.
As before, Boss’s new processing engine comes as close to the sound of a real Roland Space Echo as you could wish for – though you’ll have to use your imagination to hear the thrumming of the tape motor. The balance between crisp clarity and analogue-style frailty is right on the nose. But thanks to the separate bass and treble controls, plus the extremely effective age button, we get more control over how bright or dark we want the repeats to be.

The ability to dial in super-realistic modulation gives us a shortcut to extra warmth and depth. But even better than that is the added saturation knob. The dry signal remains clean (for now at least…) but you can really mangle the echoes here, or just rough them up a touch, and it works perfectly.
The footswitchable reverb, meanwhile, is included in all 12 modes. It still doesn’t sound great on its own, no matter which algorithm you pick, but as a textural softener behind the repeats it does a decent job.

We’ve no such reservations about the warp and twist effects. Having these so easily accessible might tempt you into all sorts of irresponsible behaviour, especially as it’s possible to engage the latter while you’re already running the former. It’s nice to see Boss encouraging wild experimentation – something that real tape delays are, after all, rather good at.
The fourth virtual tape head is not available on its own but only as part of multi-head modes 8 through 12, but that’s no great loss. The extra patterns opened up by that extra head provide fresh creative ground – it’s a bit frustrating to go back to the three-head RE-2 after this.

That’s arguably even more true of the memory feature. There are enough distinct sounds available in this pedal to make the option of storing presets worthwhile, and it works just as seamlessly as it should – the only snag being that changes to tape age and reverb bypass status are not recalled when you come back to manual mode. It’s surprising just how annoying this can get.
Accessing the RE-202’s boot-up tricks is simple enough. Muting the dry signal, doubling the maximum delay time and assigning multiple controls to an expression pedal have exactly the same results as on the RE-2, while switching between the five reverbs – as we touched on earlier – is not quite as transformative as we were hoping. There are also lots of options for external MIDI switching.

But it’s the digitally simulated RE-201 preamp that’s the most potent feature here. Remember the overdriven repeats we mentioned earlier? This setting simply applies that dirt to the dry signal as well – so if you set the delay level to zero, you now have a one-knob overdrive pedal. It’s not going to knock the original Klon Centaur off your board but it’s a perfectly sound bit of balanced mid-gain crunch.
What’s holding this glorious machine back from a perfect 10? Well, there’s the price… plus, like the RE-2, it has stereo outputs but no stereo delay algorithms, meaning immersive ping-ponging bliss is off the menu. There is, however, a USB port on the back. One for a future firmware update, perhaps?
Key Features

DESCRIPTION Programmable digital multi-head delay with reverb, made in Malaysia

The post The Big Review: Boss RE-202 Space Echo – Bigger is better with this amped-up tape-delay unit appeared first on Guitar.com | All Things Guitar.