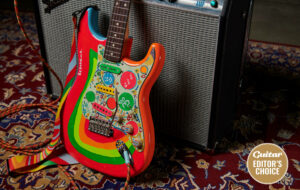 When you think of George Harrison’s most iconic electric guitar, such is his immeasurable cultural impact, a case could simply be made for all of them! How do you separate the Cavern Club 57 Duo Jet from the Ed Sullivan show Gretsch Country Gent? Or the Rickenbacker 360 12-string that helped spark a whole new genre of music? What about the Clapton-gifted ‘Lucy’ Les Paul, or the 1969 rooftop gig Rosewood Tele?

For many George fans however, their favourite and somewhat unsung hero is his 1961 Sonic Blue Stratocaster dubbed ‘Rocky’.
Image: Fender
Back in 1965, eager to develop their sonic arsenal, John Lennon and George decided they’d each like a Fender Stratocaster, dispatching legendary Beatles tour manager, roadie and all-round ‘fixer’ Mal Evans to find a pair. Evans returned with a matching pair of Sonic Blue 1961 Stratocasters, both a couple of years old by this point.
Nobody knows why they weren’t adopted as stage guitars by John and George, but both Beatles soon set about using them as regularly as recording studio instruments in the Help sessions and onwards.
Sometime in 1967, post Sgt. Pepper… and before the June 25th All You Need Is Love global broadcast, ever mindful of the cultural zeitgeist and strongly influenced by London’s vibrant fashion scene of the day, the Fab Four took to decorating their guitars with vivid colourful psychedelic designs. With the exception of John’s Gibson J160E, professionally refinished in purple and pink by Dutch art Collective, The Fool, it was John, George and Paul themselves who painted their own guitars.
Image: Fender
Lennon painted his Casino in a white grey, Paul McCartney drizzled white, black and red paint over his sunburst Rickenbacker 4001S Bass, and George got out the Day-Glo paints and (then wife) Patti Boyd’s sparkly green nail polish resulting in one of music’s most iconic artist-painted guitars in history (other than perhaps Jimi’s fabled Monterey Strat and V).
George dubbed the guitar ‘Rocky’ and was clearly proud of his work, showcasing it publicly on the All You Need Is Love broadcast in 1967 and during the I Am The Walrus and Magical Mystery Tour clips in the Autumn of that same year.
The 1961 Strat had been a studio favourite of George since tracks such as Ticket To Ride and Nowhere Man, and it featured heavily on the subsequent Revolver and Sgt. Peppers… albums too. George later set up the guitar for slide and continued to bring out Rocky for many years – even on the road after the Beatles breakup.
Image: Fender
A couple of years ago (2020) the Fender Custom Shop were lucky enough to examine the actual Rocky Stratocaster (serial number 83840 initially sold to the Grimwood Musical Shop in Whitstable Kent, the logo of which still adorns both the rear of the headstock of George’s original and this replica) courtesy of the Harrison estate which to this day still sports its vivid Day-Glo paint finish.
The Custom Shop team were able to intricately map out every detail of the historic instrument from neck profile, to pickups, paint tones and patterns. A limited run of exacting Fender Custom Shop replicas were built and quickly sold out, snapped up by deep-pocketed Beatles fans. The eye-watering £23k price tag was partly due to the sheer time each guitar took to be hand-painted in exactly the same style as George’s own Rocky.
Which brings us nicely to the latest Mexican version, and whilst the price tag is steep in relation to standard Mexican-made Strats, if you consider the extra time in finishing each guitar with the custom graphics, then we think Fender will have no trouble at all selling these. In fact, as you read this the Rocky Strats have sold out in the UK at least.
Image: Fender
In use
We think Fender have done a superb job recreating the paint job, the texture of the Day-Glo-style paint (check one out under black light for maximum psychedelic fun!) and sparking glitter under your fingers as you remove the guitar from its period correct, brown tolex Fender hard case is enough to set a Beatles fan’s heart aflutter.
Whilst beauty is of course skin-deep, so the saying goes, under the psychedelic paint job what you get is a lovely Mexican-made Stratocaster, built to pretty much early 60’s specs.
A nicely weighted and contoured alder body, an early 60’s slim-ish “C” profile neck featuring a beautifully playable 7.25” radius ‘board and with vintage-style frets that gradually tapers to a medium “C” as you progress up the neck.
Image: Fender
Our review guitar has an absolutely stunning dark slab of rosewood for its fingerboard, so glorious in fact that we had to check the spec that there wasn’t a mention of Brazilian – which there isn’t. From others we’ve seen online, we speculate Fender Mexico may have reserved some of its best fingerboard blanks for this limited run of 1000 instruments.
Plugged into our Fender Deluxe Reverb, the classic combination of a trio of 60’s-voiced single-coils and vintage-style vibrato combine to deliver everything you could ask of a good Strat; notes have a snappy attack and ring with a deliciously smooth sustain. The pickups are nice and twangy at the bridge, vocal in the middle and smooth and flute-like in the neck position, albeit without quite the magical airy top end of our reference 1964 vintage Stratocaster.
The modern five-way switch, whilst not being vintage accurate, is a worthwhile addition for ease of access to the deliciously quacky in-between 2 and 4 positions for when your tastes turn more to Little Wing than Lady Madonna.
Image: Fender
Overall, we can forgive the poly finish to the back neck at the price point, and whilst we wish the pickups had a touch airier chime, overall once again we are reminded of the sheer quality of the guitars made by modern Fender’s Ensenada factory. Of course, a standard Mexican-made Player Strat would cop pretty much identical tones for far less cash, but for the sheer inspiration and fun every single time we pick it up, this is one of the most enjoyable guitars, at any price, we’ve had the pleasure of playing for years. If you do manage to find one, take it out, play it and ‘Go cat go!’
Image: Fender
Key Features