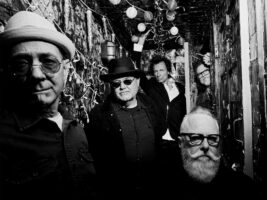 After pioneering Nashville’s alternative rock scene in the 1990s – at a time when Music City was a little less open to anything other than country – Chagall Guevara successfully Kickstarted themselves back into full-swing two years ago. The result? 2022’s Halcyon Days, a collection of songs old and new, showcasing the peak of the band’s unique take on invigorating alt-rock.

READ MORE: Madison Cunningham on tackling grief in songwriting, and the end of the idea of the “female guitarist”

The core of the band’s sound is the interplay between Dave Perkins and Lynn Nichols. The production of their comeback record shows off their six-string conversations via a veritable arsenal of vintage amplifiers and – unsurprisingly given the band’s roots in America’s heart of recording – mojo-packed old-school recording hardware.
The band’s signature sound, as Nichols explains, mashes up the sonics of the British Invasion and American classic rock. “This meant getting out the vintage Les Pauls, Rickenbackers, Strats and Gretschs and plugging into vintage Voxs, Marshalls, and Fenders,” he says. “Dave’s Les Paul and Marshall/Fender Bassman combo with my Rickenbacker 12 string and Vox AC30 emerged as the blueprint. Dave and I were steeped in a lot of the same guitar-based music, but our playing experiences and applications were very different. The diverse mingling of styles and textures made for a very colourful musical mosaic.”
Image: press
We asked Perkins and Nichols to dissect their favourite guitar parts on Halcyon Days.
Resurrection #9

Dave Perkins: “The part I always listen for on this track is my primary rhythm part, which is the first thing you hear, and then hear again on each verse. I’m fond of it because in a house full of vintage amplifiers, I played the part through my daughter’s cheap solid state First Act practice amp. She bought it at Target. For a tubeless amp, it has a very cool, creamy breakup and it finds its own sonic space among all the vintage amps. On the song’s bridge, I used a 1968 Goldtop Les Paul with ‘patent sticker’ pickups into the JTM-45 via Strymon Lex and Digi Reverb RV7 pedals.
“My primary guitar parts were performed on a ’73 Les Paul Standard. For slide, I played a Frankenstein one-pickup Epiphone fitted with an old T-Top Humbucker. Three or four texture layers I were various combinations of a 1958 Tweed Fender Vibrolux with the original speaker, a Marshall JTM-45 head through a 1962 Fender Bassman cab with two EV SRO speakers, or a 1967 ‘drip edge’ Bassman into an old tweed Deluxe cab with an EV SRO.
“I wish I could tell you what this song is about. Steve did most of the heavy lifting with the lyrics (another fallout from COVID isolation). However, even when Steve, Lynn, and I write lyrics together, we tend to push abstraction. And Resurrection #9 keeps that process in play. Despite the seeming lack of logic or topic, there’s usually something large at stake, and I know that’s the case here. Let me know when you find it!
Lynn Nichols: “This song started out with a big Glam riff from Dave affectionately referred to as Fuzzenstein, until Steve came up with the Resurrection #9 concept. Dave’s riff is so effective and huge it became a challenge to figure out where and what to play so as to not interfere. It finally came together when I picked up my Broadcaster which still had 5 strings tuned to open G. The intro and turnaround figures on top of Dave’s Fuzz monster just fell out under my finger tips.”
Goldfingers

Dave Perkins: “This is another COVID track – parts recorded at home studios. The song started as a demo I recorded in 1998 using 2-inch tape by way of an MCI 428 console (made circa 1973). Regarding the arrangement, credit where credit is due: I was regularly listening to Spirit at the time – and, my acoustic part bears witness. Steve had a copy of the demo, and when we began to talk about writing together again, he asked if we might use this track for a foundation. Even though Lynn and I added several new guitar parts, the acoustic tracks and my single-note passages survived from the original demo.
“The acoustic is a 1972 Martin 00-18. My single-note passages were played on my ’68 Les Paul Goldtop through a 1958-59 4×10 Fender Bassman. My other textures on this song were my ’73 Les Paul into the 1967 ‘drip edge’ Bassman
“Lynn’s Spanish flourish that sets up my arpeggio solo is a high moment and a darn good surprise within the arrangement.”
Lynn Nichols: “The band Spirit provided the embers that sparked Dave to sketch out a demo that was never finished. Being a Spirit fan myself I was easily convinced to jump in and finish this song with Steve and Dave. I love the mood swings and dramatic changes in soundscapes.”
Treasure Of The Broken Land

Dave Perkins: “I love this track! We recorded the song for a ‘tribute/memorial’ album for our friend, Mark Heard – a great songwriter who died much too young, much too soon. Treasure… was recorded on 2-inch tape by way of an old Trident console. We had one day to record and mix, so our version of the song was ‘fly by instinct.’ We had never performed it. As such, the finished result turned out to be a sum total of the band’s shared experience playing live and recording. To me, it feels wonderfully organic and earthy. And, Mark’s lyric (for his father’s passing) is deep and heartfelt.”
“I love the outro where my guitar gets tangled up with Lynn’s, making a most infectious cacophony. We end the song with a tip of the hat to Mott the Hoople by chanting ‘all the way to Macon’ – Mark’s hometown and one of my many stops along the guitar road of life.
Lynn Nichols: “We recorded this song, written by the late Mark Heard as a tribute.
Recorded at Battery Studios in Nashville by Russ Long, assisted by Shane D Wilson.
There were a few overdubs as I remember, but largely it was recorded live on analogue tape, which gives it its raw power and energy. I really love this recording!”
“All my backing vocals are also sung through a Vox mini amp and a Radio Shack mic, using an Old Blood Noise Endeavors procession pedal.”
A Bullet’s Worth A Thousand Words

Dave Perkins: “Deep texture on this one! This is one of the Chagall Guevara songs where I can easily lose the definition between guitar parts and players. It all overlaps and blends. Regardless of that, I can still remember some of what I did. My main guitar was a ‘72 Les Paul Standard. I used that guitar for all of my lead parts, played into a Marshall JTM-45 amp with a late-60s Marshall 4×12 cabinet with 20-watt Rola speakers. For some of the rhythm parts, I used a 1966 Gibson Melody Maker into an early 60s Vox Cambridge Reverb amp. At a few points, I played through a Leslie 122 cabinet (and may have used my ’62 Stratocaster on the Leslie parts).
Lynn Nichols: “This is a Fuzz fest! I love the textures, tones and depth to this recording. Dave and I are both manning Fuzz pedals, crisscrossing and traversing each other through much of the song. I was playing my ’56 Goldtop with P-90s, a great guitar and super light weight. Love those P-90s, they were singing. This song has breadth and haunting contrasts, like the backing vocals’ hypnotic mantra, ‘Let’s just cry and say goodbye.’”
I Still Know Your Number By Heart

Dave Perkins: “This was recorded with the songs that became our first album for MCA. With this track the band coloured way outside the lines. We saw ourselves as a Southern, post-punk, alt rock guitar band with smart lyrics. At the time of recording, it had become common for bands to write the same song ten times – establishing a musical brand. Lynn and I bemoaned the loss of genre freedom we used to see in the bands we grew up on. The Stones went hard country with Wild Horses; the Beatles found their way of tipping the hat in multiple directions.
“We wanted to exercise a little of that freedom and found a way with I Still Know Your Number By Heart. I had toured and recorded with fiddle great Vassar Clements and studied bluegrass motifs to be able to keep up with him. I was thrilled to be able to use some of that hard learning with Chagall Guevara. My country and bluegrass lines – especially those that close the song – reflect my time with Vassar and to a lesser extent my time playing for Jerry Jeff Walker in Austin.
“Another appreciable aspect of the song is that it is essentially a stripped-down performance: when the band performs this song it’s much the same as the recorded version. One difference became clear when the band reunited to play the Ryman several weeks ago – my ability to play those country licks as fast as the recording had gone to seed. In my defence though, it was thirty years after the fact. Nevertheless, the song still kicked ass and the story brought laughs.”
The post Chagall Guevara on how Halcyon Days mashes up the sounds of British Invasion and US classic rock appeared first on Guitar.com | All Things Guitar.