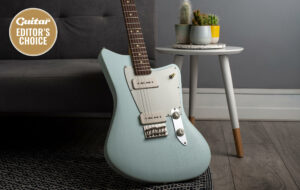 Straight out of the box, this guitar smells different. But you get used to it… and honestly, there’s not a lot else to dislike about the Trent Model 1, a distinctively stylish and surprisingly affordable solidbody crafted in a one-person workshop on the south coast of England.

That unusual fragrance is a clue to one of the most notable features of this instrument: Elliott Trent builds his guitars with an eco-minded approach that involves sustainable woods (in this case obeche), vegan-friendly glue and solvent-free water-based paints.

The thin satin finish really lets the grain of the obeche show through, and we have to say that in Trent’s own variant of sonic blue it looks spectacularly nice – like a luxury version of the old Gibson ‘faded’ effect. And don’t worry, we’re assured the smell fades away soon enough.
But what kind of guitar is this? Well, one look at the silhouette tells us it’s an offset, in the sense that the waist is further forward on the top side than on the bottom, as with a Jazzmaster or Jaguar. That should come as no surprise – with long-established UK brand Gordon Smith also launching its first offset in the form of the Gatsby this year and more offsets on Instagram than you can shake an asymmetrical stick at, it’s clearly the design paradigm of the moment.
Pack a punch: Bare Knuckle Old Guard P-90s provide a mixture of power and bite
But in the case of the Model 1, it’s only really the body outline that fits the trendy template. When it comes to the stuff that matters in terms of tone, this is more like a mash-up of Telecaster and SG Special.
The essentials, then: we’re looking at a fairly straightforward six-string, with an obeche body if you opt for this open-pore finish or poplar if you want full gloss (for £250 more). The neck is maple with a Bolivian rosewood (pau ferro) board; on our review sample the scale length is 25.5 inches, the neck carve is a slimmish C and the fretboard radius is 12 inches, but all that can be specced to your own preferences at no extra cost.
Back in the saddle: the Trent wears a through-body six-saddle bridge
The soft angles of the headstock go nicely with that gently futuristic shape, especially as its face is colour-matched; our only complaint here is that, even against this pale shade, the gold Trent logo is crying out for a fine black outline to really make it pop.
The bridge is a through-body hardtail with Strat-style bent steel saddles, but there is another option here that could make this guitar much more appealing to fans of ‘real’ offsets: a Hosco vibrato tailpiece modelled on the kind fitted to classic JMs and Jags, paired with a tune-o-matic bridge. That adds £100 to the price.
One area where the UK has no shortage of homegrown talent to call on is pickups, and Trent’s choice here is a pair of Bare Knuckle Old Guard P-90s. These are described by their manufacturer as smooth and bright in tone, with an EQ profile showing strong treble and a bit of a scoop to the mids. Match that with a light and resonant body like this one and, in theory, you have a formula for something quite tasty.
Tone up: the guitar’s simple controls have plenty of useful range
In use
Before we get into the good stuff, of which there is a lot, we need a quick word about the fretboard… because it does feel a little bumpy. The reason for this is that Trent has adopted a conservative approach to both the rolling of the board’s edges and the dressing of the fret ends themselves – and they’re quite tall frets. Yes, we’re being picky, but if you have the delicate hands of an apprentice rabbit-groomer you’ll be glad we mentioned this.
Now, did someone say ‘light and resonant’? The Trent Model 1’s vibrant acoustic tone makes us wonder why obeche – most famously used by another British maker, Shergold (and briefly by PRS) – isn’t a fixture of the boutique luthiery scene. Maybe it’s the smell – it must be quite heady when it’s raw. Anyway, once we’ve plugged in, that pleasing natural voice is translated into something perky and bright but nicely balanced, with absolutely bags of that unique P-90 thrap in all three pickup positions.
Grain of truth: the Model 1 features a pau ferro fretboard
It’s no surprise given the voicing of these Bare Knuckles that the midrange is so fresh and open; what’s perhaps most remarkable is the scale of the tonal differences between those three settings.
The neck pickup has no shortage of pep in the top end but is beautifully full and smooth; the bridge unit sees much of that low-end content swiped away but replaces it with a supersize helping of twang and snap; and the middle position sits right between the two, bringing enough sweet cluckiness to draw jealous glances from a Rickenbacker.

All of this sounds almost as pretty through an overdriven amp as it does feeding a clean one: the Fender-derived elements of the design ensure things remain clear and breezy, while the P-90s keep everything solid, meaning this is a guitar that feels comfortable with a broader range of playing styles than most.
And for even more versatility we only have to look to the volume and tone controls, two parts of a guitar that have a seemingly simple job but rarely do it quite as well as this. Either one of them, or indeed both, can be turned down as low as four without any loss of musicality – things just get quieter and softer-edged respectively, with the core character of the guitar remaining absolutely intact. The neck pickup even does a nifty ‘woman’ tone – maybe it’s time someone came up with a new name for that, eh? – with the second knob at zero.

We’ve seen more and more high-end builders across the Atlantic turning to a combination of Fender-style offset design and Gibson-style P-90 pickups – there’s no question it’s a winning recipe for any guitarist who’s willing to mix up their classic ingredients. The fact that British makers now seem to be getting on board with that approach is a welcome development… especially when the results are as delectable as this.

DESCRIPTION Six-string solidbody electric guitar, made in the UK