The Chats have paid tribute to the legendary AC/DC – honouring their fellow Aussie rockers with the release of a new single entitled ACϟDC CD.
In the song, bassist and singer Eamon Sandwith dub AC/DC the “second-greatest band in history,” and proudly states that he listens to their music “twice a day, seven days a week”.
Meanwhile, the single’s accompanying music video paid homage to three of AC/DC’s most famous music videos: Let There Be Rock, Thunderstruck and It’s a Long Way to the Top (If You Wanna Rock ‘n’ Roll). Check it out below.

The single is the first new release from the Queensland-based punks since the launch of their debut EP, High Risk Behaviour, in March. In an interview with Australian radio station Triple J, Sandwith explained how his love for Acca Dacca began.
“My dad took me to the Sanity in Logan and I purchased my first CD with my own money, which was Back In Black by AC/DC,” he said. “I was utterly blown away at how hard this band could rock, and I played it in the car every day to and from primary school.”
“I still fucking love Acca Dacca so I wrote this song as a tribute to one of the world’s rocking-est bands, AC/DC.”
The Chats came to prominence back in 2017 when their song and music video Smoko went viral on YouTube. The band were scheduled to tour Europe and the UK this year, although those plans have since been shelved to to COVID-19.
For more music news, click here.
The post The Chats honour AC/DC as “the second-greatest band in history” in new song appeared first on Guitar.com | All Things Guitar. 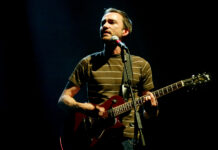