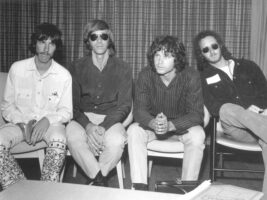 The Doors’ Robby Krieger wishes Jim Morrison was still around: “You see the Stones still playing, I get really jealous”

Robby Krieger, guitarist for The Doors, has recently admitted that he wishes that the band’s late singer Jim Morrison was still alive and performing.

READ MORE: The Rolling Stones On How The Beatles’ Image Was Contrived To Make Them More Digestible To The Public: “They Were Exactly the Same As We Were”

Speaking on the Broken Record podcast Krieger opened up on how he misses the band’s frontman Jim Morrison – confessing that he gets “jealous” when he sees bands such as The Rolling Stones continuing to tour.
When asked to describe how he thinks Jim Morrison would be if he were still alive today, the guitarist says he is often asked that question but has only recently changed his response.
“For years people would say: ‘If Jim was around now would he be clean and sober?’ and I’d go ‘Nah! Kamikaze drunk!’… but for the last few years, I’ve thought about Clapton and Eminem and it’s a different time [so] yeah, sure. Why not?” he explains.
He continues, elaborating on why he has changed his outlook and admitting he finds it hard being unable to continue playing with the band, even half a century after the vocalist died:
“I like saying that because it’s different [but] unfortunately, we don’t get to have him around anymore. It would be great. you see The Stones still playing and stuff, I get really jealous when I see them, you know?”
Elsewhere in the interview, the guitarist goes on to explain what it was that made The Doors stand out from other bands at the time. Here, Krieger shares how the band initially struggled to make people listen to their now-hit track, Break On Through (To The Other Side).
“[Getting global recognition] was pretty quick. When Light My Fire came in, that was the whole game-changer because, before that, we put out Break On Through as the first single and it didn’t do very much,” he states. “All our friends would be calling [radio stations to make it a request] because that’s how you got on the radio before– you’ve got to have an audience call-in!”
The reason behind this lack of interest was because of the unique nature of the song, Krieger states, explaining how the unconventional drums and keys in the track made it stand out more than anything else on the scene.
“It starts out with the Bossanova drums. No one has ever done that since even! The way [John Densmore] played Bossanova, no rock drummers can do that,” he says. “The guitar had nothing to do with it. [And] Ray’s genius licks…wow!  […] It’s pretty amazing really. Riders On The Storm… you listen to that [keyboard solo] and it’s genius. [Even when other tracks include keyboards], it never quite sounds like Ray.”
Find the full interview below.

The post The Doors’ Robby Krieger wishes Jim Morrison was still around: “You see the Stones still playing, I get really jealous” appeared first on Guitar.com | All Things Guitar.