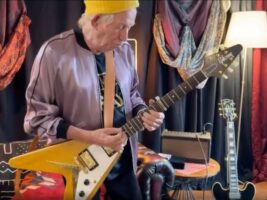 Taking to Instagram last Friday (July 8), the brand’s president ​​shared a thirty second long clip of the rock legend showcasing his new axe.
Describing the new guitar as Keith’s own personal 1958 Korina Flying V, the footage was taken shortly before The Rolling Stones took to the stage at London’s Hyde Park for their most recent performance.
Writing the caption “Keef @officialkeef Hyde Park #London before going on stage with his new @gibsoncustom 1958 Korina Flying V!”, Gueikian also encouraged his followers to comment on what their favourite track by The Rolling Stones is, claiming that his number one choice is Sympathy For The Devil.

Traditional in its setup, the axe sports stunning gold hardware alongside a solid, natural Korina body, white pickguard, black pickguard rings and a Rosewood fretboard – all coming together to give it that vintage 1950s look.
The post Watch Keith Richards taking his new Custom Shop 1958 Korina Flying V for a spin appeared first on Guitar.com | All Things Guitar.