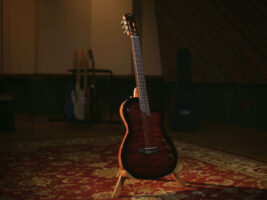 Cordoba has launched the Stage, its first electro-acoustic nylon-string guitar, loaded with an all-new pickup system co-developed with Fishman.

The Stage’s design takes cues from both steel-string electro-acoustics and classical guitars. The mahogany body is solid but fully chambered, meaning the guitar is still light but has plenty of resonance, thanks to the freely-vibrating spruce top. This is itself topped with a flame maple veneer, finished in a new Edgeburst finish.
The neck is three-piece mahogany, topped with a pau ferro fretboard. It’s notably thinner at the nut and slightly more radiused than most classical guitars, with a 16” radius rather than a flat fretboard. This should provide a playing experience a little more familiar to steel-string and electric players, while still not removing the guitar’s classical influence entirely.
The neck isn’t the only ergonomic touch, either. The body is thin, measuring only 40mm, and has a smaller lateral size than most nylon-strings. The guitar also features comfort contours, meaning you won’t be resting your forearm on any sharp edges. Due to its construction the lower cutaway can also be a lot deeper, allowing full access to all 22 frets.
The guitar’s namesake is its pickup system, developed in partnership with Fishman. The Stage pickup is so named as it aims to address feedback issues that can arise while playing a fully-hollow nylon string on stage at volume – something also helped by the guitar’s solid, chambered construction.
It produces its sound via a mix of an undersaddle transducer and an internal body microphone, as well as a new preamp system with controls for volume, tone and blending between the transducer and the mic.
The Cordoba Stage has a list price of $970. Hear the guitar in action below.