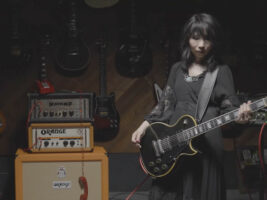 EarthQuaker Devices has continued to tease its upcoming collaboration with the legendary Boris, and this time has given us a little insight into what the pedal might sound like.

In the new promo video, titled simply “…”, EQD’s Jamie Stillman, whose phone number is apparently “666”, receives a call from the ever-talkative Boris guitarist Wata, who proceeds to communicate the ideal guitar tone using several Matamp and Orange amplifiers.
Stillman takes some notes, and presents the camera – briefly – with the resulting circuit schematic as he slaps it down next to a pedal-building workstation.
Given what’s played to Stillman over the phone, it’s not unreasonable to assume that the upcoming pedal is an amp-style overdrive, based on the thunderous sound of Wata’s signature towering stacks of Orange cabinets.
Check out the short teaser below.

Stay tuned to Guitar.com for updates on the new pedal from Earthquaker Devices.
The post The EarthQuaker Devices x Boris collaboration: an Orange/Matamp-style drive? appeared first on Guitar.com | All Things Guitar.