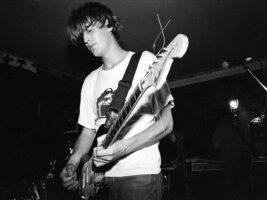 The Genius Of… Slanted and Enchanted by Pavement

“Pop music catches on like a meme. It just takes a little bit of tinder, and it can become a phenomenon.” Pavement’s Stephen Malkmus astutely reflected in 2018. In the same interview (with Esquire) the then 52-year-old indie-rock godfather revealed that he was always keeping an ear to the ground, dissecting the modern pop charts mathematically to try to unpick its ever-changing, winning formula.

Little wonder that Malkmus is keen to decode the mechanics of success, his band’s unanticipated rise to the pinnacle of indie rock primacy some 27 years before wasn’t achieved via heavy major label promotion or deft chart-chasing, but by a conscious upturning of listener expectations. His breezy attitude to the recording process – and life in general – became central to Pavement’s slacker-rock appeal.
In 1991, the 24-year-old Malkmus was nervously putting the finishing touches to his band’s debut full-length album. Capturing the ramshackle sound of three young men pushing at the limits of listener tolerance, Slanted and Enchanted’s 14 tracks might have been intended as a wry 90s update of Stephen’s post-punk influences (The Fall and My Bloody Valentine in particular), but, through a combination of unkempt, dissonant chord structures, tangled, grubby riffs, tuneful, vibrant melodies and coolly delivered (but earnestly intelligent) lyrics, Slanted and Enchanted was a felicitous moment-seizer. And one which prescribed the DIY ethos of independent music for decades to come.

Maybe maybe
Formed by high school friends Malkmus and Scott Kannberg (aka Spiral Stairs) in Stockton, California, the pair’s initial ideas (aside from having fun playing local open-mic nights) was that they would experiment with freeform musical expression, and write material that evaded the howling anguish of the then on-the-rise grunge scene, or the pomposity of stadium rock. Malkmus and Kannberg were middle-class, suburban kids – and that’s what they wanted their own music to reflect. “Whatever soul you have being a suburban kid like us, what can you do that’s right that way?” Malkmus explained to MOJO in 1999, “Because we’re not Black Sabbath, we’re not working-class heroes and we can’t get away with that. Luckily we’re not hanging out at Met Bar, either, we’re not New York City hipsters or anything, so that’s our earthiness.”
Freeing themselves from the pressure of trying to be something they weren’t, the duo’s early sound fizzed with raw elements that would soon come to enthral the local indie scene. Early tracks such as the spritely jog of the heartbroken Box Elder or the ominous, angular spikiness of She Believes revealed Malkmus and Kannberg’s predilection for using their guitars as a diverse musical paintbrush. Complementing, and competing, with each other.
These songs, along with three others, were recorded at future drummer Gary Young’s ‘Louder Than You Think’ home studio in one four-hour session. The resulting first EP, Slay Tracks: 1933-1969, pulsed with Malkmus and Kannberg’s noise guitar, purposefully captured in tinny, near-transistor-radio quality (this was stressed by the wash of radio noise on EP opener You’re Killing Me. Pavement’s homespun production aesthetic was born. “When I first heard them, I did not understand it.” Young reflected in an interview with Vice in 2015, “I’d tell my friends in New York I just made this weird record and I don’t really know how to describe it.”
This gloriously sloppy debut EP was a riveting listen, organically shifting between furious squalls of guitar, and shaky arrangements that were barely able to stand, before decaying into abstract expressions of fury. Occasionally bolstered by an eccentric (and often improvised) rhythms – a result of Young’s spontaneous decision to leap behind the drumkit during the sessions. Another crucial ingredient in the developing stew, was Malkmus’s vocal delivery, which veered from a sardonic, idle cool, to a hormonal wail across the EPs run time.
Just 1,000 copies of Slay Tracks… were pressed, and released to surrounding independent stores by Kannberg’s self-run label Treble Kicker. This very first Pavement release was soon recognised as a word-of-mouth, underground gem by indie rock scribes and attentive devotees of their local Stockton scene. It was enough to pique the interest of Chicago-based Dan Koretzky, who was in the process of founding his own label Drag City. Recognising Pavement’s potential, he promptly signed the outfit, and two further EPs quickly followed.
Across Demolition Pilot J7 and Perfect Sound Forever Malkmus and Kannberg were given space to develop their sonic universe. At this point, Gary Young joined the Pavement ship full-time – squaring off competition from their then live drummer Jason Turner.

For more reviews, click here.
The post The Genius Of… Slanted and Enchanted by Pavement appeared first on Guitar.com | All Things Guitar.