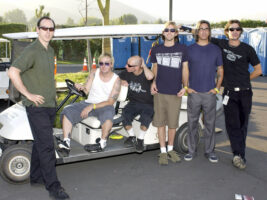 The Genius Of… The Process of Belief by Bad Religion

If Bad Religion’s music – fast, knotty punk with its roots firmly in the earliest thrashings of the Los Angeles hardcore scene – has always suggested a charge to the finish line, its potency also owes plenty to a series of gaps, pauses, break-ups and exits in the band’s 40-year history. The Process of Belief, which turns 20 in January 2022, has become a key blueprint in their late career renaissance, driven on by a keen contextual understanding of their own work and the return of a prodigal son in the form of guitarist Brett Gurewitz.

The LP reunited vocalist Greg Graffin with his long-term sparring partner for the first time in almost a decade while helping to usher the band out of major label stasis and back into the welcoming arms of Epitaph, Gurewitz’s label and a cornerstone of the punk explosion of the mid-1990s thanks to the Offspring’s Smash becoming the biggest selling independent record of all time on their watch. It also ensured that three of hardcore’s most important guitarists – with Gurewitz slotting in alongside Greg Hetson, also of Circle Jerks, and Brian Baker, whose resume features stints in Minor Threat and Dag Nasty – lived under the same roof for a time.

Straight to hell
Bad Religion came together in Los Angeles in 1980 and existed in a state of chaos in the early part of their tenure. Gurewitz formed Epitaph in order to put out their first 7” in 1981, while their classic 1982 debut How Could Hell Be Any Worse? was followed by Into the Unknown, a synth-rock dud that has gone down in history as one of punk’s great missteps, a year later. It helped put the band on the slab until 1985, when Hetson was called up to replace Gurewitz, who was dealing with a drug problem. This line up, also sans bassist Jay Bentley, would last a matter of months and one EP, Back To The Known.
In 1988, everything changed with the release of Suffer. The LP, recorded with Gurewitz and Hetson in tandem and a rhythm section of Bentley and Pete Finestone on drums, was the first shot in a salvo that would help reshape the punk landscape in anticipation of its huge crossover several years later. No Control (1989) and Against the Grain (1990) furthered Bad Religion’s research into breakneck speed, precise melodies and multi-part harmonies (the oozin’ aahs in the band’s parlance) and set the table for their own moment in the mainstream spotlight.
Released in 1994, Stranger Than Fiction marked a move to Atlantic Records and Gurewitz’s acrimonious second exit. He said they’d sold out, they said he was on drugs, he said he wanted to focus on Epitaph, everyone said he and Bentley had fallen out. Either way, the record went gold and ensured that Gurewitz was both an architect of and participant in the year that punk broke.

For more reviews, click here.
The post The Genius Of… The Process of Belief by Bad Religion appeared first on Guitar.com | All Things Guitar.