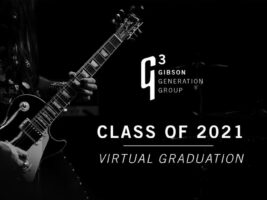 The Gibson Generation Group class of 2021 graduates in virtual ceremony

The inaugural members of Gibson’s class of up-and-coming guitar players, the Gibson Generation Group (G3) programme, are today celebrating their graduation with a virtual ceremony.

The head of the programme, Jenny Marsh, said of the milestone: “This inaugural G3 class was truly vital in shaping what the Gibson Generation Group will become for future members, and we have a solid foundation to build upon. The G3 artists are now a part of the Gibson family, we look forward to watching them grow and we’ll continue to champion their success.”
The class spans 18 young players (some were just 10 when they joined) from China, France, India, Japan, Netherlands, Norway, England, Spain, and the USA. You can see all of the class in action with the virtual graduation ceremony, which will be airing on Gibson TV later today (19 July).
As well as giving their performances, the class also talk about their experience being part of the programme. Members receive global performance opportunities, participate in global advertising campaigns, and extensive promotion to help build their audience.
Gibson also notes that fans should be on the lookout for news about the class of 2023, who will join the programme this year.
The post The Gibson Generation Group class of 2021 graduates in virtual ceremony appeared first on Guitar.com | All Things Guitar.