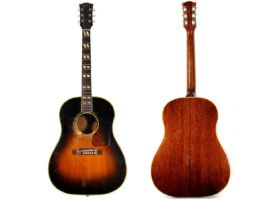 An acoustic guitar that was once shot by Rolling Stones guitarist Keith Richards is to hit the auction block, complete with un-repaired bullethole.

READ MORE: Charlie Watts to sit out The Rolling Stones’ No Filter tour to recover from medical procedure

The instrument, a 1952 Gibson Southern Jumbo, had a hole blasted in by Richards following an argument with his fellow Rolling Stones guitarist Ronnie Wood in 1995. The argument occurred in a Memphis hotel room, according to the memoirs of Jo Wood, Ronnie Wood’s ex-wife, when Richards walked in on Wood playing it.
The auction listing for the guitar claims that: “Richards asked where Wood got the guitar from, and Wood said he borrowed it from Mick Jagger.
“Richards was so mad that they took his guitar that he grabbed it, sandwiched it between two pillows, took out a gun and shot it. The guitar not only still has the hole, but also has remnants from one of the foam pillows used to silence it.”
The auction is being hosted by the New Jersey auction house Gotta Have Rock And Roll. Bidding has kicked off at $150,000, with an estimated final price of $250,000.
The listing also notes that: “Richards owned and frequently played this acoustic guitar on stage during the Rolling Stones’ 1995 Totally Stripped tour.

“He used this guitar during every single live performance of Shine A Light during the tour, and his use and love for the guitar are heavily documented in the Stones’ Totally Stripped documentary.”
You can see the auction lot here.
The post The guitar Keith Richards shot a hole in is going up for auction appeared first on Guitar.com | All Things Guitar.