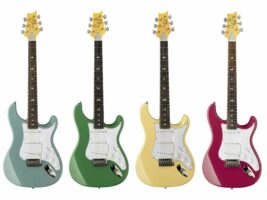 The SE edition of John Mayer’s PRS Silver Sky model has finally been confirmed and is primed to offer players a more affordable way to get their hands on the popular signature model.

The guitar is primed for release next Tuesday, 11 January and demos of the instrument will drop then, as well, according to an Instagram post by the Maryland-based guitar brand.
Major departures from the original come in the guitar’s solid poplar body and 8.5” fretboard radius, in lieu of an alder build and 7.25” radius, respectively.
The guitar also features a maple neck, rosewood fingerboard with 22 frets and Small Bird inlays, a trio of 635JM “S” single-coil pickups with a Strat-style control section, vintage style tuners and a synthetic bone nut.
As for finishes, it seems players will be able to pick up the Silver Sky SE in four finishes: Ever Green, Stone Blue, Moon White and Dragon Fruit.

Pricing has yet to be revealed for the SE version of the Silver Sky – however, it’s worth knowing that guitars in the affordable range are typically priced between £600 to £1,000. The Silver Sky currently lists for £2,399.
Last year, Reverb.com revealed the PRS Silver Sky to be the third best-selling guitar on its platform in 2021, outselling all US-made Fender Stratocasters.
The post The PRS John Mayer Silver Sky SE is finally coming – and it makes a few key changes from the original appeared first on Guitar.com | All Things Guitar.