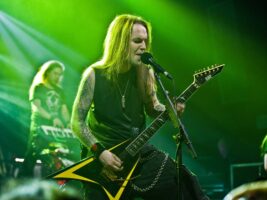 Watch: Rare footage of Alexi Laiho working in the studio before his death surfaces online

Previously unseen footage of late Children Of Bodom founder Alexi Laiho working in the studio shortly before his death has surfaced online.

The footage, which shows the metal guitarist and singer working with Bodom After Midnight – his musical project after the disbandment of Children Of Bodom in 2019 – was uploaded to YouTube by Ykä Järvinen, who directed the video for the band’s song Paint the Sky With Blood.
“I have quite a lot [of] footage from these Bodom After Midnight studio sessions which never got released because maestro left this realm way too soon,” Järvinen wrote in the video’s caption. “I really don’t know if any more of this stuff will be released but here’s another small clip I did edit over a year ago as a demo for the guys so I hope you enjoy it or then don’t.”

Bodom After Midnight were only able to record three songs prior to Laiho’s passing; all were released posthumously. You can watch the video for Paint The Sky With Blood below.

Alexi Laiho died at the age of 41 on 4 January 2021, and two months after, his legal widow and Sinergy bandmate Kimberly Goss revealed that the legendary Finnish guitarist had died from “alcohol-induced degeneration of the liver and pancreas connective tissue”.
In a statement posted to Instagram, she also revealed that the guitarist “had a cocktail of painkillers, opioids and insomnia medication in his system” at the time of his death, calling his death “entirely preventable” and a “cautionary tale that no one is invincible”.

The post Watch: Rare footage of Alexi Laiho working in the studio before his death surfaces online appeared first on Guitar.com | All Things Guitar.