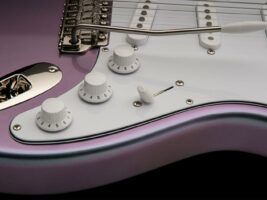 It’s end-of-year wrapup season, and Reverb.com has revealed which guitars changed hands most via its platform over the last year.

READ MORE: Reverb says it’s been the “Year Of The Keyboard,” but guitars still remain “incredibly popular” – see which guitars are selling the most

The sales include used and new guitars – not the total number of guitars manufactured and sold directly or through retailers. The electric guitar list is topped by two staples of Fender’s made-in-Mexico Player range – the Telecaster and, below that, the Stratocaster. Coming in third, notably above all US-made Stratocasters, is the PRS Silver Sky. This signature model for John Mayer was heavily inspired by his favoured vintage Stratocasters.
Other big-hitters on the electric guitar list include the Gibson Les Paul – with both the Standard ‘60s and Standard ‘50s models landing at eighth and ninth, respectively.
Although the list is peppered with Fender and Squier guitars, fans of offset guitars might be surprised to learn that the highest-scoring Jazzmasters land at 16 and 17 on the list, being the Squier J Mascis Jazzmaster and the Squier Classic Vibe ‘60s Jazzmaster.
The bass guitar list is a little less surprising, being topped by reliable classics such as the Fender Player Precision and Jazz Basses, the Ibanez GSRM20 and the Rickenbacker 4003.
Acoustic guitars are also a little out-there, with the top seller being Gretsch’s offbeat G9500 Jim Dandy, a tribute to the flat-top parlor acoustics of the 1930s, 40s and 50s. Small guitars dominated the acoustic list, with Taylor’s GS Mini Mahogany, PRS’ SE Parlor P20E and Martin’s Little Martin making the top ten.
See the full lists here.
The post The PRS Silver Sky outsold all US-made Fender Stratocasters on Reverb across 2021 appeared first on Guitar.com | All Things Guitar.